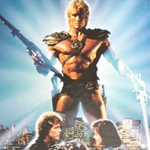 I guess Cannon was trying to make their version of a STAR WARS type fantasy sci-fi-deal. You can tell that when a character says “You got us here, you Thumerian wurbat, now get us home,” but it was already clear from the opening credits over a starfield and the STAR WARSy themes by Bill Conti. Then the credits explode into a shower of sparks. How could this not be exciting? END_OF_DOCUMENT_TOKEN_TO_BE_REPLACED