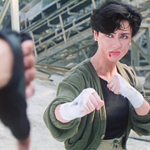 Note from Vern: I’m working on a write-up of the Cinefamily Seagalogy event, but for now please enjoy this review of an obscure Hong Kong gem thanks everybody.

SHE SHOOTS STRAIGHT (aka LETHAL LADY) is an action vehicle for Joyce Godenzi, who stole the show as the Vietnamese double agent in the classic EASTERN CONDORS. She had been in a bunch of movies before this, but I believe this is her only starring vehicle. Today she’s known as the wife of Sammo Hung (who has a supporting role in this), but it should be noted that she didn’t marry him until 1995, so that’s not why she gets a movie, it’s not because of nepotism. Actually, it’s probly because she was Miss Hong Kong, 1984. But I’m glad they thought of doing that because she is incredible.

Here she plays Mina, a supercop who recently got a promotion and also married her handsome co-worker Tsung-Pao (Tony Leung, the one from A BETTER TOMORROW 3).

And you’d think she’d be happy as a clam on Zoloft but she’s got this problem that now she’s got a gaggle of sisters-in-law who are fellow cops who all hate her. They’re worse than the sisters in THE FIGHTER. They’re jealous of her success at work, they try to undermine her authority, disobey her commands, embarrass her. They whine about her getting all the credit for an operation where she clearly deserved the most credit. If they were honest with themselves they would acknowledge that she was the one who slid down the side of a parking garage, jumped onto a moving cab, climbed through a bus, jumped out the other side onto the moving getaway car, got shot at and rolled off and almost run over by a motorcycle which she then commandeered and chased the car literally through a wall of fire, drove over it, ducked a bullet, skidded out the bike and jumped off so the car would hit the bike, flip and roll without hurting the princess. Yeah, the sisters helped, but Mina did the Jackie Chan shit. Plus, the attack happened when most of you ladies were in the bathroom. END_OF_DOCUMENT_TOKEN_TO_BE_REPLACED

There’s alot of big movie anniversaries this summer. Everybody’s celebrating 30 years since the Summer of ’82 shit like E.T., THE THING, BLADE RUNNER, CONAN THE BARBARIAN. And I’ve been trying to commemorate the important summer of ’87 ones like PREDATOR and ROBOCOP. Little did I know that there was another movie, originally released July 9th, 1987, worthy of that kind of respect, but that I never saw before.

Geez, man. What have I been doing these last 25 years that was so god damn important I couldn’t be bothered to watch EASTERN CONDORS? Nothin, that’s what. Why did nobody convince me to watch this one before? This is my new favorite movie until further notice. The only legitimate reason to not watch it is if you’re worried that it will be hard to find another action movie to watch after that, because not many hold up to the EASTERN CONDORS standard of fun. END_OF_DOCUMENT_TOKEN_TO_BE_REPLACED