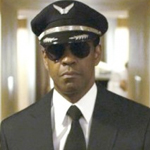 I wish FLIGHT was called BAD PILOT and marketed as an outrageous comedy. It kinda follows the BAD SANTA and BAD TEACHER model by showing this guy (Denzel Washington, RICOCHET) who is in this occupation (commercial airline pilot) and ruffles alot of feathers with his irresponsible drinking and drugs and being an asshole. In fact, he ingests almost a BAD LIEUTENANT worthy amount of intoxicants. And like Bad Santa, who liked to buttfuck plus-sized ladies in the dressing rooms, or Bad Teacher, who seduced Justin Timberlake into a wild dry-sex romp, this guy is fuckin around, but just with a super hot flight attendant (Nadine Velazquez, BLAST) who gets listed first in “in order of appearance” credits because one of her breasts is the first thing we see in the movie.
END_OF_DOCUMENT_TOKEN_TO_BE_REPLACED