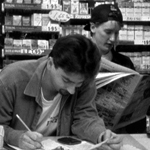 In doing this series on debut indie features it seemed like I oughta do CLERKS. I remember it being pretty funny. It was never an important movie to me, but it was for alot of people, and seems like a notable step in the evolution of low budget movies turned pop culture phenomenons, for better or worse.

Most of the directors I’m doing in this series went on to become important or great. Here’s the rare indie smash where the director didn’t fizzle out or get much better. I’ve sort of stood up for some of the recent widely panned Kevin Smith films (like TUSK and even COP OUT), but there is no part of me that believes he’ll ever have anything near a DO THE RIGHT THING or an OUT OF SIGHT or even a SCHOOL OF ROCK under his belt. He does not strike me as a born filmatist at all, as he’d probly be the first, second and third to tell you on six different podcasts.

But back in 1994 – the same great film year that gave us PULP FICTION, HOOP DREAMS and ON DEADLY GROUND – he did have a head on collision with the ol’ zeitgeist. He said he was inspired by SLACKER (the zine-like credits also namecheck Jim Jarmusch, Hal Hartley and Spike Lee). CLERKS has a similar day-in-the-life, people-just-talking approach, but it’s much more scripted than Linklater’s, and it’s kind of the other side of the coin. It’s not the people who have the luxury of fucking around all day with no responsibilities. This is the people who do it while chained to meaningless, low-paying jobs.
END_OF_DOCUMENT_TOKEN_TO_BE_REPLACED 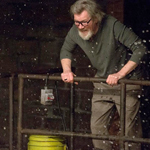 I don’t know how it happened but somehow I became the guy that’s more lenient on Kevin Smith movies than everybody else. Back in his hey day when he was a Miramax family member, an indie movement poster boy, a voice of a generation, a director of a movie in the Criterion Collection, a critical darling praised for his dialogue, I used to think he sucked. Here’s an overly harsh one I wrote back when people still seemed to like him (I advised readers not to make eye contact with people who recommend it to them). So I’m as confused as anybody that now that he’s widely hated and semi-retired I keep having an  “actually it’s not that bad” reaction to his “flicks,” as he calls them. COP OUT at least had a couple laughs, and his first horror movie, RED STATE, I actually thought was kinda good and now, I’ll be damned, I kinda liked TUSK too. What the hell?

TUSK is less consistent than RED STATE but a little more inspired in its absurdity. It continues the technique of coasting on an excellent performance by Michael Parks as a sadistic weirdo. This time he plays a retired Canadian proud of his life of rugged adventure and deranged, it turns out, by a long period of being stranded after a shipwreck. What’s that mean, that he had to go cannibal to survive, something like that? No, not quite. It means he got messed up by being isolated with only a walrus as his friend. He called him Mr. Tusk, according to his JAWS style monologue about the incident. And now he’s undergoing unusual measures to get that relationship back. END_OF_DOCUMENT_TOKEN_TO_BE_REPLACED

(disclaimer: I started writing this review before everybody was writing about RED STATE playing at Sundance, and before you guys all discussed Kevin Smith to death. But I still decided to finish it because the tortoise vs. the hare, etc.)

Kevin Smith has been in the news lately for not wanting to be in the news. He’s done a few interviews about how he refuses to do interviews, and sights like /film have been kissing his ass for basically saying that sights like /film can kiss his ass. He has been doing promotion for his new movie RED STATE by going around saying that he will refuse to do any promotion for his new movie RED STATE.

END_OF_DOCUMENT_TOKEN_TO_BE_REPLACED

God bless Vern. He’s proof positive that anyone can turn their life around if they try. For those of you who haven’t enjoyed his writing here or on his own website, Vern’s a former convict who has channeled his post-prison energy into writing movie reviews. He loves bad-ass films, but he’ll write about the most surprising stuff sometimes. In the last few days, he’s sent me two great reviews, so I decided to run them together. I’d agree with him on one, but not the other, and I’ll let you figure out which one I mean. Vern… take it away.

Harry, I guess I don’t read your sight closely enough. I never heard of this picture other than it was playing the seattle international film festival and some people said it was good. I didn’t know what it was about but I remembered the title so I pulled it out of a box of garbage like wishmaster 3 and children of the living dead. This was a box of artisan entertainment’s straight to video garbage that not even my video store connection was going to consider watching. They were just gonna dump em off to charity.

So this is the story of the teen horror picture that almost got away. The one that played a couple film festivals and then got dumped straight to video in the US by Artisan Entertainment, due October 23. I mean you can understand with all the high quality pictures showing this summer there’s really no room to put another really good one out there. What good is another good movie. They are so abundant right now what really is the point, right? Can’t think of more than one or two good ones off hand, but I’m sure I’m forgetting something.

GINGER SNAPS is not a movie about cookies. It’s GINGER SNAPS as in THE SNAPPING OF GINGER or GINGER FINALLY SNAPS or THE STORY OF GINGER ACTUALLY SNAPPING. This is a horror picture for the strong independent women. That doesn’t mean it’s for pussies, ’cause it’s gorey and intense. END_OF_DOCUMENT_TOKEN_TO_BE_REPLACED