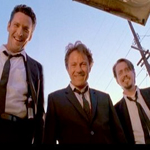 I remember the first time I saw RESERVOIR DOGS it was with a bunch of dudes that had seen it a bunch of times and knew all the dialogue and shit. I thought it was great but I didn’t really get those guys, I didn’t think I would end up watching it over and over again.

Since then we’ve seen Quentin Tarantino go through the hip hop arc of exciting new thing, “it’s only a fad,” a decade later it’s obviously here to stay and still growing so quit your grumblin ya old grouch. In fact I did the math wrong when I was watching this, I was thinking it was turning 18 this year, it would be old enough to vote. And let’s be honest, it’s not voting for Obama, ’cause it’s kinda racist and also it probly thinks any Democrat wants to take its guns away.
END_OF_DOCUMENT_TOKEN_TO_BE_REPLACED