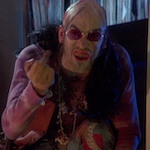 I don’t blame you if you’re skeptical during the opening scene where two obnoxious “senior boys at Wheeler High” calling themselves “Buzz and Rick the Prick” drunkenly drive a Porsche, fire guns, and harass the K-OKLA request line until they receive a drive-by chainsawing on a bridge that must’ve been built by the same people who made that endless runway from the climactic chase in FURIOUS 6. END_OF_DOCUMENT_TOKEN_TO_BE_REPLACED

I gotta confess coming to this one from a place of cinematic ignorance. I’ve seen the original Godard movie, but I don’t remember jack shit about it. I thought it was pretty good, I believe. That’s about all I got. Still, I’m sure less people could tell you anything about the remake than everything about the original. So this makes me smart.
END_OF_DOCUMENT_TOKEN_TO_BE_REPLACED

Vern tells you all about the TEXAS CHAINSAW MASSACRE 2: THE GRUESOME EDITION DVD!!! 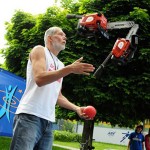 These last couple weeks have been tough on my mental facilities. I reviewed that great new “ULTIMATE” edition of the original TEXAS CHAIN SAW MASSACRE, I also revisited parts 3 and 4 in that original series, then on Thursday I reviewed the new prequel to the remake. So by that point I’d studied and written about pretty much every angle to the whole Texas Chainsaw deal. You’d think I’d be done with it by now, but there is one final chapter: the one spinoff of the original movie that achieves its own level of True Greatness. I am talking about Tobe Hooper’s 1986 sequel, THE TEXAS CHAINSAW MASSACRE 2. It’s been available on DVD for a couple years in a bare bones edition (get it, that is a pun because of all the skeletons they have) but Tuesday it comes out in a much deserved special edition with new commentaries, featurettes and deleted scenes. END_OF_DOCUMENT_TOKEN_TO_BE_REPLACED