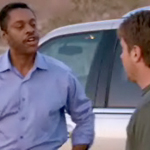 I never heard of this movie before and didn’t really have a reason to watch it except that a weird dude I know through work insisted on loaning it to me. In a situation like that you never know. It could be the one.

It’s a good setup for a no-budget movie. There are only three actors in the whole thing and one of them has a bit part as a tow truck driver. It’s the story of a down-on-his-luck white dude named Ernie (Rusty Gray) whose car breaks down on a desert road one day. After hours of trying to wave someone down he’s finally picked up by a wealthy black man named Anthony (Lawrence Hilton-Jacobs). Anthony’s on his way to Vegas for a wedding (could this be a sidequel to THE HANGOVER?), but he believes in a paying-it-forward type of philosophy so after initially passing Ernie he turns around and tries to help.
END_OF_DOCUMENT_TOKEN_TO_BE_REPLACED