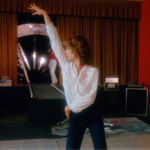 PROM NIGHT is one of the early slasher cash-ins. It has a 2008 remake, though, so it’s a classic. It kind of seems like there’s not alot going on, because the body count is pretty low and the killings don’t start until 2/3 of the way in and there’s a surprisingly long uninterrupted disco dancing scene. But at the same time there’s a couple movies’ worth of things going on.

1. There’s the whole HALLOWEEN plot. A killer (also child molester) has been locked up (and burned up) and now it’s the anniversary of the murder of a little girl and he’s escaped and kidnapped a nurse and the police are trying to find him and I hope he doesn’t come after Jamie Lee Curtis (this time playing prom queen Kim, whose little sister was the murder victim).

2. Also there’s the CARRIE plot. A mean popular girl named Wendy (Eddie Benton, DR. STRANGE, HALLOWEEN II, Sledge Hammer!, married Michael Crichton and co-wrote TWISTER with him) is jealous of Kim getting to go to the prom with her ex-boyfriend Nick (Casey Stevens, THRESHOLD) so she gets a thuggish gum-chewing neanderthal lookin guy named Lou (David Mucci, “Quick Mike” in UNFORGIVEN) to help her with a cruel prank planned to take place when the king and queen are being crowned. END_OF_DOCUMENT_TOKEN_TO_BE_REPLACED

FROM THE OUTLAW VAULTS: I never get to take Martin Luther King Day off at my job, but I’m gonna simulate taking a day off here on outlawvern.com by posting an old review of a Leslie Nielsen movie you never heard of. This is a review I came across on my hard drive that I wrote two years ago shortly after Nielsen’s death, but never quite finished or posted. It’s not a movie I’m gonna go back and rewatch in order to complete the review, but I didn’t want to waste all that typing, either. So here it is.

* * *
Under normal circumstances I wouldn’t find myself renting some 2001 Leslie Nielsen movie I never heard of. But the poor guy died recently and I happened to notice this one was written by Billy Bob Thornton (with his partner Tom Epperson and some guy who was in SPIDERBABY), so I wanted to see what the deal was.