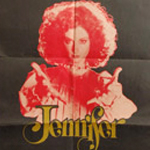 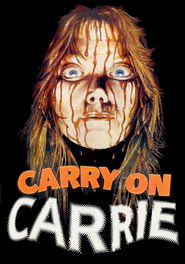 Before we address the other adaptations of CARRIE, let’s look at one of the movies its success made possible.

A few years after CARRIE was a hit, producer Steve Krantz whipped up this totally different movie called JENNIFER. Instead of just living in a decrepit house, Jennifer (Lisa Pelikan [LIONHEART, the TV version of TRUE GRIT with Warren Oates]) lives in a decrepit house that’s also a pet store. Instead of being raised by a single mother it’s a single father (Jeff Corey [SURVIVING THE GAME, the movie version of TRUE GRIT with John Wayne]) and instead of thinking her powers are the Devil’s work he thinks it’s Jesus. Instead of whatever form of Christianity Margaret White practiced, Jennifer’s father raises her as a snake handler. Instead of a sympathetic gym teacher there’s a dreamy science teacher (Bert Convy, host and producer of Win Lose or Draw) who is real cool and asks her to call him Jeff. Instead of a public high school where she doesn’t know how to fit in it’s a boarding school where everyone treats her like shit because they’re spoiled rich kids and she’s a poor kid on a scholarship. Instead of killing a pig and pouring its blood on her they hang her favorite kitten in her locker, and then say she did it and use it as an excuse to kidnap her.