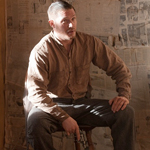 Remember after THE ROAD director John Hillcoat had this movie called THE WETTEST COUNTY IN THE WORLD that was written by his THE PROPOSITION writer (and famed singer) Nick Cave, he had at-that-time-hot-stuff Shia LaBeouf signed on and everything but nobody would fund the fuckin thing. Then suddenly a mysterious benefactor named Megan Ellison comes into Hollywood and gives him money and gives P.T. Anderson money to make THE MASTER and Andrew Dominik to do KILLING THEM SOFTLY and a bunch of other guys like this. So the legends were true, there are some good rich people out there.
END_OF_DOCUMENT_TOKEN_TO_BE_REPLACED