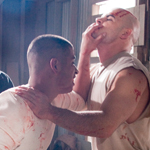 BEATDOWN is yet another movie to add to my list of formulaic underground fighting movies that I found pretty enjoyable. It’s produced by the company Tapout, and to be honest I don’t 100% know what Tapout is, but this definitely seems like a movie aimed at the people who wear their t-shirts. It’s about small town working class folks who drive gigantic pickup trucks and only care about cage fighting. They all have some sort of tragic past involving a dead and/or abusive parent, which they talk alot about. The soundtrack is all a type of rock music that makes me cringe with embarrassment, but I can acknowledge that it might sound good to the target audience. It’s a little weird though when a singer is wailing and grunting about “a wildfire in the streets” over a scene that takes place in a barn.

It’s the story of Brandon, a young underground fighter whose brother gets murdered and gangsters tell him he has a week to fulfill a $60,000 debt. There’s no way he can do that so he decides to get away from it all. He gets on his motorcycle, participates in a driving montage, and ends up at his dad (Danny Trejo)’s trailer in some hick town outside of Austin.

I’ve been systematically going through every movie of this type even if I know nothing about them or their stars. It took a bit before I realized that Brandon was played by Rudy Youngblood, the star of APOCALYPTO. Did you know he got an action vehicle after that? I like that. END_OF_DOCUMENT_TOKEN_TO_BE_REPLACED 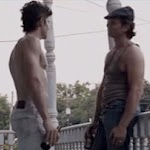 After discovering THE LOST a couple weeks back I wanted to see what else writer/director Chris Sivertson had done. The answer was I KNOW WHO KILLED ME and this underground fighting movie that coincidentally has just come to disc. It’s like the guy predicted when I would catch up with him and said “You know what, I want to do something special for ol’ Vern. Give him a movie in a genre he enjoys.” END_OF_DOCUMENT_TOKEN_TO_BE_REPLACED

Steven Soderbergh’s take on an action/spy thriller – built around “The Face of Women’s MMA” Gina Carano after he saw her on Strikeforce while flipping channels around – lives up to my high expectations. It’s written by Lem Dobbs and it’s like the kid sister of THE LIMEY, mixing the style of that Soderbergh classic with kind of a more upbeat ex-Marine-badass-operative-betrayed-and-on-the-run type of story. It has THE LIMEY’s sense of quiet, deliberate pace and dread and also its dry you-just-fucked-with-the-wrong-person type of humor. Of course, professional fighter Carano has different strengths as a performer than Terence Stamp does, so her movie has less emotion and more punching, kicking, choking, armbars, heads broken through furniture, foot chases, etc. Gina’s not gonna mourn the loss of the daughter she never knew, and Terence isn’t gonna climb up onto a roof. In my opinion. And it’s great to have both of them. END_OF_DOCUMENT_TOKEN_TO_BE_REPLACED

I’m surprised it took this long for somebody to make a straight drama about mixed martial artists. It seems so obvious. It would inherently have all the same dramatic elements as a boxing movie (underdog reaching for the top, wife tired of seeing him beat up, society treating him as a dumb brute, then the fear of losing it all by a loss or an injury, all that) plus the novelty of an expanded repertoire of moves (kicks, chokes, armbars, throws, flying knees) and of being a popular newer sport that hasn’t been done to death in movies. END_OF_DOCUMENT_TOKEN_TO_BE_REPLACED

early review: Never Back Down 2: The Beatdown

Two years ago give or take a couple days I wrote about NEVER BACK DOWN as part of some back-to-school themed reviews. To commemorate the historic second anniversary of that review they have decided to make a part 2.

If you never saw the first one I forgive you. And I think you’re gonna be okay without it. Of the many mixed martial arts/underground fighting movies of the last few years it’s the slickest and most Hollywood. It’s the standard teen subculture movie but with MMA instead of breakdancing or BMX bikes or whatever. Troubled new kid in town wants girl, she belongs to popular rich bully who also is the king of a notorious underground fighting tournament. I can’t recommend it when BLOOD AND BONE, DAMAGE, UNDISPUTED II-III and FIGHTING have all come out in recent years, but I did sort of enjoy the absurdity of these allegedly high school age dudes having their own Kumite Lite.

NEVER BACK DOWN 2 is the DTV sequel and it happens to be directed by the star of two of the above-mentioned better underground fight movies, Mr. Michael Jai White. END_OF_DOCUMENT_TOKEN_TO_BE_REPLACED

But in my world, where you gotta actually go outside, travel to a building, pick out the movies to watch and physically transport them back to your home, you’re gonna invest the time to try to give the thing a chance. And you are gonna watch BRAZILIAN BRAWL from beginning to end (about one hour) because you could not resist renting the movie with the cover that shows a guy doing a flying kick with two guns and the words “STARRING THE WORLD FAMOUS MARTIAL ARTS MASTERS THE MACHADO BROTHERS. THESE HOMBRES THROW DOWN.” END_OF_DOCUMENT_TOKEN_TO_BE_REPLACED

first trailer for NEVER BACK DOWN 2

In case you haven’t heard, the not-very-good teen mixed-martial-arts movie NEVER BACK DOWN has a DTV sequel coming out. I have high hopes though because it’s directed by Michael Jai White (who also plays the mentor character in the movie). The choreography is by Larnell Stovall (UNDISPUTED 3, the MORTAL KOMAT web thing, the upcoming UNIVERSAL SOLDIER movie).

CHOKE is an early mixed martial arts documentary, released in ’99 and directed by one Rob Goodman. They don’t call it “mixed martial arts” or “MMA,” they seem to like “no rules fighting,” even though the movie makes it clear that there are rules, and even shows people arguing over what the rules should be. It focuses on the 1995 Vale Tudo tournament, a Japanese freestyle fighting competition similar to Ultimate Fighting Championship except in a ring instead of an octagon. It has ropes instead of walls and is a totally different shape although the number 8 is divisible by 4, in my opinion. END_OF_DOCUMENT_TOKEN_TO_BE_REPLACED

I’m starting to think the underground fighting movie is to modern DTV what the western was to b-movies in the ’50s. They just never stop coming and yet somehow they’re not all terrible, in fact a few of them are great. You got BLOOD AND BONE of course, you got UNDISPUTED II-III (unless you consider prison fighting a separate genre), DAMAGE with Stone Cold Steve Austin was surprisingly good, and there’s even a good theatrically released one, FIGHTING. I’d recommend all of those above PIT FIGHTER, but I’ll be damned, here’s another pretty enjoyable and distinctively different take on this same type of storyline. END_OF_DOCUMENT_TOKEN_TO_BE_REPLACED

SHADOW FURY is a cheap-ass 2001 sci-fi action movie about clones. It has one of those inexcusable keyboard-pretending-to-be-an-orchestra scores and the acting and dialogue are at higher cheesiness levels than I’ll usually put up with, i.e. worse than a SCANNERS sequel. But I really liked this movie because it rarely goes more than a couple minutes without a really cool action scene, a clever concept or a (usually unintentional) laugh. It has a similar energy to an early Isaac Florentine, so it fits that the director, Makoto Yokoyama, did second unit and stunts for the Power Rangers. An IMDb search finds 7 specific episodes directed by Florentine with Yokoyama on 2nd unit. So let’s call him the 2nd unit Florentine. END_OF_DOCUMENT_TOKEN_TO_BE_REPLACED