Note: Like most people of the planet Earth, I re-watched the whole MAD MAX trilogy during this last week of a decade of waiting for FURY ROAD. And I knew I’d never done a write-up of MAD MAX before, so I did one. I followed that up by writing about ROAD WARRIOR. And then I realized that I already wrote a review of it 8 years ago. And sometimes that’s fine because I think my old review is sucky and I can do better now, but actually I kinda like that review, I made some good points, and I called Wez’s bitch his “desert life partner,” which was pretty good.

But let’s be honest, we’re not gonna think about a god damn thing besides Mad Max between now and 7 pm tonight and whenever we see the new one, so what the hell. Here is my alternate dimension review of THE ROAD WARRIOR where I still love it in the same way but say it in different words. 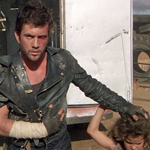 Yeah, I always liked MAD MAX, but THE ROAD WARRIOR (or MAD MAX 2 as most of the world calls it) is more my speed. Get it? Speed. ‘Cause that’s one of the things George Miller knows how to capture on screen. Even the mythically narrated opening montage establishing Max (née Rockatansky) as a legendary hero seems to be moving fast, then the screen opens up wide, we pull out of the blower on Max’s car and the movie just launches us down the highway. The insane car stunts of the first one are multiplied, now we have even more cars flyiing through the air, rolling, flipping, smashing through each other, dragging broken pieces (or people) behind them, scraping across the pavement, spraying sparks, shooting pieces of rusty debris in all directions.

Wherever Max was before, where there were bars and homes and children and stuff, he ditched that fuckin place and now he scours “the wasteland” with all the other thirsty leather-clad psychos. And I kinda doubt the Halls of Justice are still standing anyway, it seems like shit has gotten worse in general, and we know from the montage that some forgotten factions of humans went to war and dropped the bomb on each other (in old black and white stock footage). Whatever the current socio-political situation is, we know that guys like Max travel the desert roads looking for crashed cars, or causing crashed cars, and trying to steal any leaking or unused gas, or “juice.” It’s a snake eating its tail, really. END_OF_DOCUMENT_TOKEN_TO_BE_REPLACED