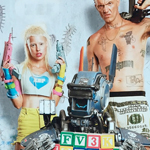 CHAPPIE is a slight but sweet sci-fi story from South Africa’s Neill Blomkamp. It’s like a meaner SHORT CIRCUIT or an unexpectedly good Asylum knockoff of the remake of ROBOCOP. The Johannesburg police are very happy with their new police robot “Scouts,” invented by cubicle-bound corporate employee Deon Wilson (Dev Patel from SLUMDOG MILLIONAIRE), and have flatly, perhaps rudely rejected The Moose, a human-operated ED-209 lookalike pushed by jealous ex-soldier Vincent Moore (Hugh Jackman). But Deon isn’t really invested in that feud – he’s invented an A.I. program which the boss (Sigourney Weaver) won’t even let him continue with, and that’s all he really cares about right now. 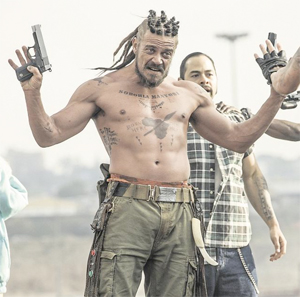 Meanwhile the weirdo South African electronical rap group Die Antwoord are involved in a drug deal gone bad and busted up by Scouts. A scary gangster named Hippo (Brandon Auret, who played mercenaries in both of Blomkamp’s other movies) who has a crazy hairdo that would make any David Ayer character teary eyed with envy, says they owe him a ridiculous amount of money, so they decide they have no choice but to quickly pull off the heist of a lifetime so he doesn’t kill them. That leads to the hair-brained idea of kidnapping Deon to get “the remote” that they assume he has for clicking the power off on the city’s law enforcement. For some reason he doesn’t really have one, go figure. So as a compromise he installs his A.I. program in a damaged police robot for them to teach how to be “the illest gangster” and use robot powers such as jump high and metal punch to help them pull off their robbery. END_OF_DOCUMENT_TOKEN_TO_BE_REPLACED 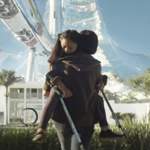 ELYSIUM is a real solid sci-fi picture, and different from the ones we usually see these days. The story is pretty simple: Max (Matt Damon), a hard-working ex-con in the shitty world of 2154, gets fucked over by an easily preventable industrial accident. It’s gonna kill him in 5 days but he knows if he was only on Elysium, the space station where all the rich people live after abandoning this polluted, overpopulated shit pile, the medical care he needs would be easily accessible. So he’ll try anything to live, including going back to work for his old crime boss who is involved in some (unsuccessful, from what we see) attempts to smuggle the tired, poor, huddled masses onto Elysium.

It’s written and directed by Neill Blompkamp of DISTRICT 9 fame. He’s from South Africa, and that movie was about apartheid of course, and this one is also about a separation between classes (not entirely, but mostly, along racial lines, it looks like). The whole planet is like one big favela on top of another big favela. Elysium is like a ring of luxurious mansions and golf courses on a perpetually beautiful Spring day. END_OF_DOCUMENT_TOKEN_TO_BE_REPLACED

Well, we’re getting to the end of the summer here and it’s been pretty light on good old fashioned popcorn type movies. Most of us enjoyed STAR TREK, but that was at the very beginning of the summer, it seems like a lifetime ago. TERMINATOR SALVATION was a letdown, TRANSFORMERS 2 need not be described, GI JOE was hilarious but not the type of behavior we want to encourage. Leave it to some 29 year old South African director of video game commercials to make the most memorable sci-fi action type movie in a while.

Neill Blomkamp was the plucky young orphan that Peter Jackson discovered living off scraps in the Wellington sewer system (not sure about the authenticity of this wikipedia bio) and for some reason chose to direct a movie of the video game “HALO.” But the money fell through on that one so director Blomkamp and producer Jackson said “Fack it” (they both have accents) and made a lower budget sci-fi movie free of video game heritage, an extension of Blomkamp’s ’05 short film ALIVE IN JOBURG. END_OF_DOCUMENT_TOKEN_TO_BE_REPLACED