Almost exactly 5 years ago when they released the first GHOST RIDER picture (directed by the writer of the GRUMPY OLD MEN pictures) I thought it looked so hilarious that I couldn’t help going to the first showing. I remember it was before noon at an AMC theater on a Friday, which I discovered was their window for what counts as a matinee, so it cost 5 bucks. Good deal, but small consolation for the unfortunately boring movie and the guilt of having participated in making it a surprise hit even though nobody liked it.

So on Friday I found myself facing down part 2, this time from Nevildine/Taylor, the giggling-camera-wigglers-on-rollerblades legally and morally responsible for CRANK and GAMER. Against 22 different styles and colors of better judgment I found myself compelled to the first showing of this one too. The matinee costs 6 bucks now. But that’s fair – it’s at least a dollar more enjoyable than part 1. Probly $1.50 even. END_OF_DOCUMENT_TOKEN_TO_BE_REPLACED

I gave CRANK two tries. I really wanted to like the movie, but I sort of hated it. I had a hard time getting past the hyperactive editing and camerawork – Jason Statham would do these things that should be exciting but the directors, “Neveldine/Taylor,” were hammering me over the head so hard with all their visual tricks that it just seemed boring. I honestly fell asleep the first time I saw it and missed that charming moment where he causes an innocent cab driver to be lynched by pointing at him and yelling “Al Quaeda!” on a crowded street.

And that’s maybe a bigger problem I had: the overall douchebaggy attitude of it, the Marilyn Manson going door-to-door trying to shock people approach to humor. Ha ha, he said something racist, you’re not supposed to do that. Oooh, he raped his girlfriend in front of a bus of Japanese school girls and they took pictures, what a fun time at the movies. (NOTE: I have been informed it’s not rape because she eventually liked it, like in STRAW DOGS.) END_OF_DOCUMENT_TOKEN_TO_BE_REPLACED 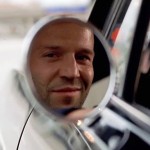 No, this is not the one where Adam Sandler has a magic remote control that he uses to conquer the world, that’s CLICK. This is CRANK, this is the one where Jason Statham (the Transporter himself) is a hitman who gets injected by high concept poison. It’s gonna kill him, but he figures out that it won’t finish until his adrenaline rate goes down. So he tries to run around, have sex, do coke and get in shootouts until he is able to get revenge on the poisoner. So it’s SPEED in a guy, with a side order of revenge.

An inventive thrill ride full of imagination and wit that keeps you constantly involved as it builds to an unbelievable climax… would be a good way to do this movie. Instead they went the DOMINO route of “if you throw every stupid show-offy technique you ever saw in a commercial at the screen, technically it counts as entertainment.” I think I know what they were thinking: he has to keep his adrenaline up, so the movie has to keep its adrenaline up too. But it’s flawed logic. THE JERK is about a moron, but the movie doesn’t have to be moronic. I don’t think SPEED had cameras flying around constantly to convince you that it’s about speed. If you show a guy in hospital gown zooming around on a motorcycle pursued by police, that is by definition somewhat exciting. But when you throw in unnecessary zooms and split screen and do a jokey flashback on one side and then freeze on a guy’s goofy expression and then switch it to black and white and then zoom into Statham’s chest to show an x-ray of his heart beating (a nod to the Furious Movement) AND you gotta throw in “exciting” guitar music made by a guy who used to be in Tangerine Dream who is now trying to rock out, it seems like you’re overcompensating. It isn’t exciting anymore, it’s just annoying. To me it’s another movie that has no build or rhythm at all, just the same frantic shit for 87 minutes straight. END_OF_DOCUMENT_TOKEN_TO_BE_REPLACED