Siege (a.k.a. Self Defense) 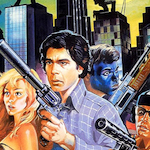 SIEGE (previously released in the U.S. as SELF DEFENSE) is a 1983 Canadian exploitation film brought to my attention thanks to the new release on Blu-Ray and DVD from Severin Films. It seems more inspired by ASSAULT ON PRECINCT 13 than any other movie, and it’s not a wall-to-wall scorcher like that, but I liked it because it’s quick and raw and has some really unique elements.

Down south in the U.S that year, heroic movie cops were being forced to break the rules to stop perverted rapists (10 TO MIDNIGHT, SUDDEN IMPACT) and kids were turning into serial killers because they witnessed gay sex (SLEEPAWAY CAMP). By contrast, SIEGE paints a picture of a Halifax gay bar and their low income neighbors being terrorized by the violent bigots in a right wing militia. The chaos starts with a police strike, where officers on the picket line egg on onlookers as they roar around in their cars whoo-hooing and doing donuts. Reporters speculate that the rowdiness will snowball from there. Sure enough a group of thugs choose this time to enter the club and announce a “New Order” they want to impose on Nova Scotia. END_OF_DOCUMENT_TOKEN_TO_BE_REPLACED