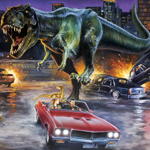 Man, this review has been in development almost as long as JURASSIC WORLD. After I typed this up I found an old version I wrote in a notebook a couple years ago, when I had mentioned liking THE LOST WORLD and readers wanted me to defend my position. I went in and stole a few phrases out of it, like I found them encased in amber.

I always thought THE LOST WORLD: JURASSIC PARK was a solid part 2 to a very enjoyable part 1. Maybe it helps that I didn’t consider the first one to be such a classic at the time. I loved it as a fun execution of a cool gimmick, but I was comparing it to JAWS and that’s a way to make it seem kinda dumb. Over the years, as it’s continued to hold up and be better than many similar movies that have come after, I respect it more. Even still, I enjoy watching part 2 and I think it’s miles better than Part three-claw-scratches. Much of the world disagrees with me, though, so here is my brilliant Perry Mason style defense. Or something.

This is the only non-INDIANA-JONES sequel that Mr. Spielberg has directed, and it opens with pure Spielberg filmatism. Ominously crashing waves intimidate the frame as a rich British couple, their young daughter (holy shit, I never realized that was 10,000 BC‘s Camilla Belle, in her movie before Seagal’s THE PATRIOT) and a pack of yacht crewmen stop for an impromptu picnic on the shore of an unsettled island. It must be nice to be rich, be able to do anything you want. But next time don’t do it on the island that Jurassic Park used to breed their dinosaurs. When Mom worries about the girl running off to play, an obvious concern would be the violent tides, but of course the real threat comes from within the island. She meets a tiny, quick-moving lizard. “What are you, a bird or something?” It’s a cute little thing, and she feeds it a piece of meat from her sandwich. But then all the sudden there are more of them, and they want some too. And next thing you know there’s a swarm, and they’re jumping onto her like piranhas on a cow, and she’s screaming…

Later in the movie Jeff Goldblum’s Ian Malcolm makes fun of the new characters being in awe of the dinosaurs. “Oh, yeah. Ooh, ahh, that’s how it always starts. Then later there’s running and, um, screaming.” But this scene zooms in on Mom’s face as she screams in terror… which dissolves into Malcolm on the subway yawning. I guess Sam Neill and Laura Dern probly turned the movie down, but it was a smart idea to turn the cynical wisecracker and chief-worrier into the lead. He wears a cool guy leather jacket, gets recognized on the subway, gets to tell off the new InGen head for covering up what happened, and Jurassic Park founder John Hammond (Richard Attenborough) when he tells him that dinosaurs have survived on one of the islands and become their own eco-system. END_OF_DOCUMENT_TOKEN_TO_BE_REPLACED