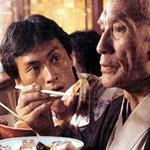 Remember when I wrote about the Japanese remake of UNFORGIVEN and THE LAST SAMURAI and I was talking about how great Ken Watanabe is and how I wanted to see him in more things? Well here’s a movie as far back as 1985 where he plays Gun, a stranger who drifts into town and helps out by… well, to be honest he helps a lady improve her noodle restaurant.

And actually he’s not the main guy, he’s the younger sidekick to a truck driver named Goro (Tsutomu Yamazaki). He doesn’t have that much to do. But in the opening he’s reading a book about the author eating with an old man who “has studied noodles for 40 years.” The scene illustrates a long, OCD process of eating soup with steps including skimming the surface with the chopsticks “to show it affection,” moving the pork slices and dipping them into the right side for later, and then eventually picking them up and tapping them on the edge of the bowl to drain them, even apologizing to the pork. It’s ritualistic, fetishistic, doesn’t make alot of sense, but it introduces the movie’s worshipful attitude toward food. And toward whatever you choose to value during your days on earth.

As the protagonist pointed out in my book Niketown, food is something you eat and then later you shit it out. But TAMPOPO argues for getting the most out of these basic things. Executing them at the highest possible level, showing them respect, enjoying them. If we could appreciate anything as much as this old man does his bowl of soup we would be living a great life. END_OF_DOCUMENT_TOKEN_TO_BE_REPLACED