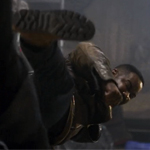 THE HARD WAY starring Michael Jai White is not a remake of THE HARD WAY starring Michael J. Fox. It’s a totally different story and he’s co-starring with Luke Goss and Randy Couture in a picture that as far as I can tell has gone straight to Netflix (no disc release). I gotta be honest, I had low expectations, because I first heard of it in an awkwardly worded tweet from co-writer Thomas J. Churchill (LAZARUS: APOCALYPSE), illustrated with key art that looks like the cover for a self-published Christian thriller novel. The director and co-writer is Keoni Waxman, who has churned out more Seagal movies than anyone else (THE KEEPER, A DANGEROUS MAN, MAXIMUM CONVICTION, FORCE OF EXECUTION, A GOOD MAN, ABSOLUTION, END OF A GUN, CARTELS, CONTRACT TO KILL and eight episodes of True Justice). He also did the Stone Cold Steve Austin movie HUNT TO KILL. END_OF_DOCUMENT_TOKEN_TO_BE_REPLACED 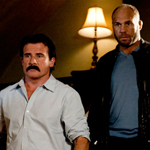 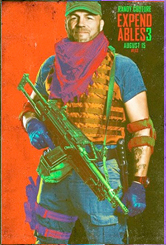 Okay, so it’s got nothin on his fighting career, but UFC Hall of Famer Randy Couture hasn’t done too bad in his play for an action movie future. He’s had MMA-related bit parts like REDBELT, he was good on a couple The Unit episodes and in some otherwise forgettable DTV pictures (SET UP, and the one with Dolph that I forgot to review), he got punched out by Seagal in TODAY YOU DIE, he plays the villain in a SCORPION KING, he was an Expendable. But HIJACKED is the first real Randy Couture vehicle. He probly shoulda waited for something better, but he’s a worker, you know. He’s gotta work.

Couture plays Agent Paul Ross, member of a CIA task force type deal trying to stop “The Tribe,” some kind of criminal/terrorist group that manipulates global financial markets or something. He finds out they may be targeting Bruce Lieb (Craig Fairbrass, HOUSE OF THE RISING SUN, CLIFFHANGER), the famous billionaire, not the fourth-string Bruce Lee imitator. Also Ross finds out that his estranged fiancee has just been hired to do PR for Lieb and will be on his private jet with him flying to meet with the SEC, so he decides to accept an offer to help with security. END_OF_DOCUMENT_TOKEN_TO_BE_REPLACED 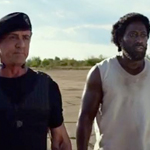 But the first stretch had me thinking it might blow the other ones out of the water. It opens mid-mission as our old Expendapals Barney (Sylvester Stallone), Lee Christmas (Jason Statham), Gunner (Dolph Lundgren) and Toll Road (Randy Couture) are in a chopper chasing after a Russian prison transfer train to bust out an original team member who’s been locked up for 8 years. That prisoner is none other than Wesley The Daywalker Snipes as “Doctor Death,” and it’s an excellent welcome home party for the man. He’s got a crazy beard and hair and a spaced out look in his eye, and instead of going with the rescue party he runs across the train, does a slide and a bunch of acrobatics, kills a bunch of his captors and causes the train to crash into the bastard in charge. END_OF_DOCUMENT_TOKEN_TO_BE_REPLACED 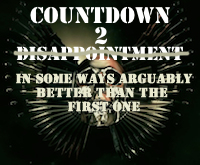 END_OF_DOCUMENT_TOKEN_TO_BE_REPLACED

From the director that brought you BEATDOWN and the letters that brought you STEP UP comes SETUP, Bruce Willis’s first DTV action movie. (I’m not gonna count ASSASSINATION OF A HIGH SCHOOL PRESIDENT). So I raise a glass to you, Bruce, on this historic occasion. They might’ve meant it to be a theatrical release, but if so they should’ve told that to the guy writing the script (Mike Behrman, GHOST RIDER: INSIDE THE ACTION). Doesn’t seem like he was expecting that level of scrutiny. END_OF_DOCUMENT_TOKEN_TO_BE_REPLACED

My friends, I write this review with a heavy heart. I know you’ve been waiting patiently for me to review THE EXPENDABLES, but first I had to process it, and what it has done to us. Sometimes a man must go on a journey to find himself before he can rise in the morning and face others. Ever since I was a young END_OF_DOCUMENT_TOKEN_TO_BE_REPLACED

Part of the reason for my Countdown to The Expendables was to expand my action movie horizons. I didn’t want to just revisit movies I’d seen before, so I gave myself some rules: for each major EXPENDABLES cast member I wanted to review a movie I’d never seen before. Not just one I hadn’t reviewed or hadn’t seen in a long time, but one I had no experience with at all.

But with Randy Couture this is a problem, because he doesn’t have 50 movies to his name like Gary Daniels. END_OF_DOCUMENT_TOKEN_TO_BE_REPLACED

The Scorpion King 2: The Rise of a Warrior 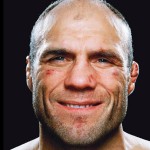 THE SCORPION KING 2 RISE OF A WARRIOR is the story of a warrior who rises. In movies we’ve seen many people and things rise, including The Machines, Carlito’s Way, The Silver Surfer, Leslie Vernon, Taj, Cobra, the Lycans, Gator, Jack Johnson, and Fred A. Leuchter, Jr. But never before have we seen the RISE OF A WARRIOR.

In this movie there are actually a bunch of different warriors but in my opinion the specific warrior who is rising is the one who will later be called the Scorpion King, not in this movie but in the very end of a different, better movie called THE SCORPION KING. What I’m trying to say is that this is the prequel to the prequel to the sequel to THE MUMMY, a movie I thought sucked. So the fact that this one is above average for DTV is pretty impressive. If you met a guy whose great, great uncle by marriage was a Nazi or a serial killer, but the guy you met wasn’t that big of a dick or anything, you would think “Good for him.” Same goes for THE SCORPION KING 2 RISE OF A WARRIOR. END_OF_DOCUMENT_TOKEN_TO_BE_REPLACED 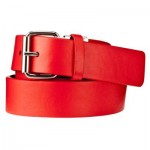 If you’ve seen anything by David Mamet then you know it’s kind of surprising (and awesome) that his new movie is about Brazilian jiu-jitsu. I even heard rumors that it was a straight ahead kickboxing movie like BLOODSPORT, and when the opening credits had Japanese drums like Christopher Lambert’s THE HUNTED I was about ready for the rebirth of action cinema. But this is really not an action movie. Anyone who goes in looking for that might be disappointed like the guy who wanted his money back when I saw GHOST DOG. Maybe not quite as much – there’s not alot of poetic shots of birds flying or long scenes of dudes driving around quietly contemplating. But this is not BEST OF THE BEST 2008, it’s definitely a David Mamet movie. Slowly unfolding plot that could go in any direction, narrative that respects the audience enough not to spell everything out for them, an intricate con, macho dialogue, magic tricks, Ricky Jay, Joe Mantegna, Mamet’s wife, songs by Mamet’s wife. I was hoping William H. Macey would show up as some retired kickboxing legend, but maybe next time.

The best thing about the movie is Chewetel Ejiofor. He plays Mike Terry, the instructor at a small, struggling jiu-jitsu academy, and a total fucking badass. He has some ties to bigshots in competitive mixed martial arts (or “karate potpouri” I believe they prefer to call it) but he doesn’t consider competition fights to be honorable, so he won’t do that even when he needs the money badly. It’s best to just let the plot fall into place, it’s not exactly high concept. But I will say that it involves some coincidence, a broken window, some lies, and some sleeper holds. END_OF_DOCUMENT_TOKEN_TO_BE_REPLACED