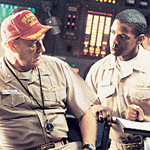 What more high pressure situation could there be than two men in a submarine arguing over whether or not to launch a nuclear missile? I guess the only thing that would make it more tense would be if they also had to get home in time for a kid’s birthday party. Luckily the birthday party happened at the beginning of the movie, right before they were deployed to take part in “the worst standoff since the Cuban Missile Crisis.”
END_OF_DOCUMENT_TOKEN_TO_BE_REPLACED