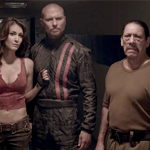 END_OF_DOCUMENT_TOKEN_TO_BE_REPLACED

MORTAL KOMBAT ANNIHILATION is an asinine sequel by any standards, but as long as you don’t hold the MORTAL KOMBAT legacy too close to your heart it’s pretty fuckin funny.

In the first one it seemed like they tried hard to mold the vibe of the game into a new type of martial arts movie for the early digital era. In this one I really thought the video game creators must’ve got a big head and forced every bullshit video game concept they could think of onto the poor bastards who had to try to turn it into a passable story. END_OF_DOCUMENT_TOKEN_TO_BE_REPLACED

I know MORTAL KOMBAT is not exactly a high kwality movie. It has one or more leads who are completely unconvincing as fighters. Linden Ashby as Johnny Cage can maybe get by on arrogance, but the teacher from BILLY MADISON as Sonya Blade just comes off as a grouchy aerobics student in a black painter’s cap that’s supposed to make her a supercop. This movie is a pioneer in bad computer generation imaginations, possibly the first movie to prove that CGI not good enough for a feature film is in fact good enough for a feature film. (Say thank you, SPAWN).

But I gotta admit, I kind of like this stupid fucking movie. It has, as we Americans say that the French say, a certain… I don’t know how to spell it in French. It invented a completely new style of cheesy stupid fun. And it keeps a straight face the whole time. I mean, look at Scorpion there. Does he look like he’s gonna wink at you? Fuck no. The man is serious. END_OF_DOCUMENT_TOKEN_TO_BE_REPLACED

If I had to choose the better STREET FIGHTER I guess I’d have to go with the newer one, STREET FIGHTER: THE LEGEND OF CHUN LI. It’s a slick, competently made preboot with TV actress Kristin Kreuk as the young Chun Li. There seems to be more martial arts in the first 8 minutes (when Chun Li is still a kid) than in the entire STREET FIGHTER: THE MOVIE even if you watched it two times in a row. Could’ve done without Chun Li’s constant voiceover narration through the first half, though. END_OF_DOCUMENT_TOKEN_TO_BE_REPLACED