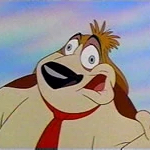 Earlier this year I did a week of rock ’n roll related animated features, including Don Bluth’s ROCK-A-DOODLE, which was released on August 2, 1991 in the U.K. (though not until the following April in the U.S.). In that review I talked about Disney struggling in the ‘80s, and Bluth disagreeing with their direction and splintering off to try to recapture the old Walt magic, doing a pretty good job for a while but then completely losing the plot by that time, when he made that completely befuddling movie about a farm rooster exiled to animal Las Vegas.

Meanwhile, Disney was finally getting their shit together, in a way that reinvigorated the entire American animation industry. It kicked off in the summer of ’88, when Robert Zemeckis and Richard Williams’ love letter to animation history WHO FRAMED ROGER RABBIT was a giant hit with adults as much as kids. Then in ’89 THE LITTLE MERMAID perfected the musical fairy tale formula that Disney and its rivals would attempt to recapture for the rest of the decade. (A similar thing was happening on TV, with every network trying to make prime time cartoons in the wake of The Simpsons. Even the cartoons made for younger audiences were beginning to be more creative and less disposable: Nickelodeon debuted Doug, Rugrats and The Ren & Stimpy Show on August 11th.) END_OF_DOCUMENT_TOKEN_TO_BE_REPLACED