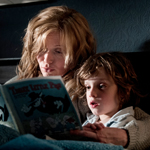 BABADOOK, BABADOOK, BABADOOK. Man, that’s all anybody talks about ever since this movie played the A, B or C Film Festival last year. At first I just ignored it, ’cause I thought it was some Howard Stern thing. But when I found out it was an Australian horror movie I knew that aligned with my interests.

It’s immediately captivating. It has a stylish look, kinetic editing and interesting faces on its two primary characters, the lonely widow Amelia (Essie Davis, who of course played Maggie in both MATRIX sequels [okay honestly I don’t remember who that character is]) and her weird little son Samuel (Noah Wiseman), who’s about 7 years-old but is introduced testing powerful catapults and dart guns and talking about bashing a monster’s head in with a rock.

There’s some Sam Raimi-esque flourishes here and there, and it’s easy to picture a cutesy horror comedy where the kid goes Ash, saves Mom from a monster with home-made weapons and traps, furrows his brow and says some one-liner, charming the socks off the midnight film festival crowds and twentysomething writers for movie websights. And I would’ve been okay with that if it was done well, but I like that writer/director Jennifer Kent (you know, “Lab Lady” from BABE: PIG IN THE CITY) chose a less obvious path. END_OF_DOCUMENT_TOKEN_TO_BE_REPLACED