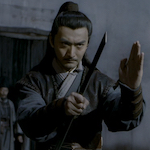 THE SWORD IDENTITY is a 2011 period martial arts movie that’s the debut of writer/director Xu Haofeng, based on his own book. He’s directed a few more movies since then and notably wrote THE GRANDMASTER for Wong Kar Wai. I adore that movie and all its poetic musings about kung fu styles and secret moves, so I tried this one out and, though it’s in many ways THE GRANDMASTER’s stylistic opposite, I was not disappointed.

From the title I guessed it would be kind of a sword forensics thing. Maybe someone recognizes a famous sword in someone’s hand and has to learn of its history to identify the person or solve some mystery about them. It could also just be Jason Bourne with swords, which I would also be down for. It’s closer to the first option. It’s sort of about a sword causing a mistaken identity. When two men come into the town of Guancheng carrying swords of an unusual design they are mistaken for Japanese pirates, causing a citywide ruckus. END_OF_DOCUMENT_TOKEN_TO_BE_REPLACED