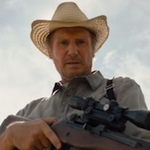 THE MARKSMAN is one of this year’s Liam Neeson (THE DEAD POOL) Old Man Action movies. It came out on disc a month or two ago and had played in theaters in January, wherever it is that those were open at that time. It’s one of the rare theatrical releases if this era that did not get delayed by the pandemic – in fact they pushed it up one week. Had things been normal I definitely would’ve seen it at an early afternoon showing at Pacific Place with four or five other loners in the theater and I would’ve been satisfied as I walked out after the credits ended and the young man with the garbage can at the door told me to have a good day as I emerged from the quiet auditorium to the cheesy narrator promoting the A-List on recordings in the lobby.

(Sorry – I wrote this review before I’d been back to theaters, must’ve been getting nostalgic.)

Neeson plays a very fictionalized version of Jim Henson called Jim Hanson. He’s a Vietnam vet who lives right next to the Mexican border and has recently run out of money because of his late wife’s cancer treatments. Aside from one drunken scene where he does a really good low grumbly voice, it’s the standard Neeson accent, but he’s so All-American he literally has an American flag draped over his shoulder when a guy from the bank (Alex Knight, Narcos: Mexico) shows up to tell him his ranch might be taken from him. I like the little bit that Jim tells him he spread his wife’s ashes on the hill over there and the guy says “I’m sorry for your loss.” Trying to seem humane without even following what he’s talking about.

Jim is the kind of guy who has a walkie-talkie to call in what he calls “I.A.s” crossing his property. But at least he’s the kind who will bring water and call for a medic for one who gets left behind. END_OF_DOCUMENT_TOKEN_TO_BE_REPLACED