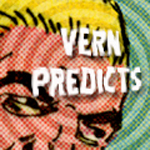 It was 2007. The Year of the Dolphin. The Scouting Centenary. The year of the last Harry Potter book. The year that Anna Nicole Smith and Bam Bam Bigelow passed. The year that DIE HARD turned PG-13. Amidst all that turmoil and unrest I wrote about an Alejandro Jodorowsky DVD box set for the famous The Ain’t It Cool News websight. And in that review I prophesied a day when the then-mostly-forgotten underground filmmaker of the early ’70s would become a mainstream pop culture phenomenon:

“This thing is gonna spread across the globe like airwaves. Rappers will start quoting HOLY MOUNTAIN; on CRIBS they’ll have THE FILMS OF ALEJANDRO JODOROWSKY next to their SCARFACE dvd. Bono will buy a thousand copies and pass them out to world leaders, so they can begin their journeys of enlightenment…” etc. I went on for a while.

END_OF_DOCUMENT_TOKEN_TO_BE_REPLACED

I am posting this not as an attack on the websight in question, which I sometimes read, and which I know at least one of the regulars here writes for, but simply as a presentation of the facts at hand and a demonstration of my powers.

On April 1, 2008, I posted a fake geocities.com/outlawvern redesign titled “Cheetohs Presents Vern’s Cinematic Movie Blog.” It was full of dumbed down and crassly commercialized content including, for some reason, a sidebar with the nutrition information from a bag of Cheetos: 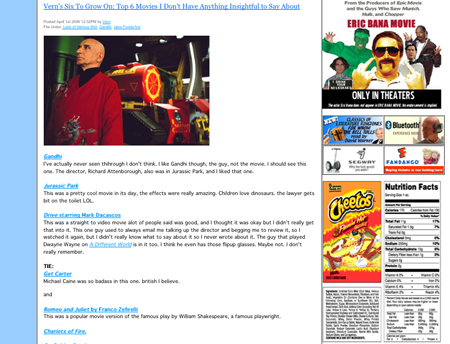 END_OF_DOCUMENT_TOKEN_TO_BE_REPLACED

Don’t worry, no Batman spoilers here. In today’s episode of VERN PREDICTS I will brag about the time I sort of foresaw a stupid little thing that happened. Also let’s lay down a few rules about discussion in case a new Batman movie comes out this week.

END_OF_DOCUMENT_TOKEN_TO_BE_REPLACED

There’s alot of action movie news going around (I guess Jet Li’s not gonna be in EXPENDABLES 2, and they’re trying to get Donnie Yen?) but to me the big one is TOM YUM GOONG 2 (aka THE PROTECTOR 2). We already knew that Tony Jaa had returned from the monastery to do this sequel. We maybe were so fixated on his return to civilization that we didn’t properly acknowledge what good news it is that Jaa has patched things up with director Prachya Pinkaew (ONG-BAK, TOM YUM GOONG, CHOCOLATE, ELEPHANT WHITE) after their falling out over ONG-BAK 2: THE WEIRDENING.

Now comes word that TYG 2 will co-star Jija Yanin, that badass little asskicker who starred in CHOCOLATE and RAGING PHOENIX. (thanks to rewrite in the comments for tipping me off.) END_OF_DOCUMENT_TOKEN_TO_BE_REPLACED

Me on Jeremy Renner in my HURT LOCKER review last July:

I think he’ll get an Oscar nomination and a bunch of big roles that hopefully don’t waste his talent too much. In fact I’m gonna go ahead and predict that they’ll give him one of the big comic book roles. We can have Chopper as Hulk, Patrick Bateman as Batman and Jeffrey Dahmer as Captain America.

Jeremy Renner is in final negotiations to join “The Avengers,” Marvel Studios’ big-screen take on its superhero team that’s being directed by Joss Whedon.

Renner will play the bow-and-arrow-carrying hero Hawkeye, who, while not one of the initial members of the team when it was created in the 1960s, became an integral member soon after when the misguided villain switched sides.

So he won’t be playing Captain America, but they’ll at least be co-workers. Not a bullseye for me, but not a bad shot, huh?