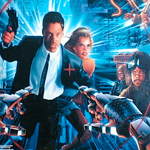 When we talk about JOHNNY MNEMONIC now it’s usually with a smirk. Rapid advances in the technology that it speculated about have made some of its vision of 2021 goofily dated. Star Keanu Reeves (BRAM STOKER’S DRACULA) was still solidifying as an action star and brought a funny surfer dude lilt to his slick underworld messenger character Johnny. And even at the time it was considered a failed moviefication of William Gibson’s “cyberpunk” style of sci-fi, which had a strong reputation as a cool, edgy type of literature as opposed to the old timey painted cover fantasies of previous eras. But they turned it into what was seen as some cheesy Hollywood bullshit.

Since the mid ’80s, tales have been told of the brave souls trying to adapt Gibson’s debut novel Neuromancer into a major motion picture (directors attached have included Chuck Russell, Chris Cunningham, Joseph Kahn and Vincenzo Natali). But this short story adaptation, directed by installation artist/occasional music video director Robert Longo and written by Gibson himself, beat it to the screen by 20 years and counting. They just had to replace the mirror-eyed “razor girl” character Molly Millions in the story with the regular-eyed Jane, because Molly was tied up with the rights for Neuromancer, since she’s in that too.

Gibson and Longo originally set out to make a $1.5 million black and white sci-fi noir, but couldn’t get the funding, so they agreed to a $20 million version with TriStar Pictures, whose other productions that year were THE QUICK AND THE DEAD, HIDEAWAY, 3 NINJAS KNUCKLE UP, JURY DUTY, MAGIC IN THE WATER, DEVIL IN A BLUE DRESS, NEVER TALK TO STRANGERS and JUMANJI. As artistic types and Hollywood rookies they may have been out of their depth trying to make a summer blockbuster with the star of SPEED, and Longo didn’t get his cut anyway. It turned out undeniably messy. END_OF_DOCUMENT_TOKEN_TO_BE_REPLACED