Frontier(s) is kind of a 2000s French take on THE TEXAS CHAIN SAW MASSACRE. It takes place when an extreme right winger has been elected President, sparking riots across the Paris suburbs (which is English for French for “the hood”). Our protagonists are 5 kids who tried to take advantage of the chaos to do a robbery, but one of them got shot. They split up, and two of them take the wounded guy to the hospital while the other two head out to the booney(s) to hide out. Those two get to a small inn and try to get the two girls at the desk to, you know, enjoy the room with them. And things get ugly pretty quick after that.
END_OF_DOCUMENT_TOKEN_TO_BE_REPLACED 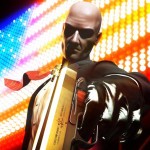 Timothy Olyphant (the bad guy from LIVE FREE OR DIE HARD [aka the killer from SCREAM 2 {SPOILER FOR SCREAM 2}]) plays a gentleman by the name of Forty Seven, who is a super badass hitman who does nothing at all in life except kill people for a secret organization that has something to do with the church and that raises orphans to be assassins and tattoos bar codes on their heads and makes them stay bald and dress like Dick Cheney. And although the movie has some enjoyable moments I feel like a movie that’s about that should really be more enjoyable than this is. And I’m sorry to say it but I think I have to throw some of the blame at the casting of Mr. Olyphant.

He’s a pretty good actor and I usually like him, but there is a major problem here: he doesn’t look good bald. I really believe that when they had him all signed on and were excited and then started fitting him for his costume and shaved his head and looked at him they must’ve thought oh shit. What have we done? There are plenty of people who can pull off bald: Samuel Jackson, Jason Statham, Telly Savalas, Patrick Stewart, Louis Gossett Jr., Montell Williams, Isaac Hayes, Gordon from Sesame Street, etc. And then there’s everybody else. I’m not saying Olyphant looks like a freak or anything, but he doesn’t look cool, it doesn’t look natural. This is a guy who should not be bald until God or cancer tells him to. And every time he’s sneaking away from an assassination, trying not to be captured or killed by Interpol, the Russian Secret Service and everybody else in the world you keep wondering how it is that nobody can spot this weirdo with the bald head and the tattoo on the back wearing a spotless black suit with a blinding red tie. I know it’s based on a video game and that’s where they get the look from, but come on. Super Mario would have an easier time not getting spotted. END_OF_DOCUMENT_TOKEN_TO_BE_REPLACED