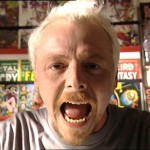 HOT FUZZ is the new British comedy picture from S. Pegg/N. Frost (lead comedy actors) and E. Wright (director). They are the same individuals responsible for SHAUN OF THE DEAD, the zombie comedy from a few years back that is known to be so potent that just the mention of it causes a boner on any film fan under the age of 27 residing within a 50′ radius, even if they don’t have the equipment.

Well, I’m gonna lose some credibility with my friends and colleagues in the nerd community by saying this, but I think these movies are a little overrated. I do not by any means think they are bad movies. They are fun movies, they have laughs, they are fairly original, and they are very sincere about their love for the genres they are paying tribute to, it’s not some Leslie Nielsen style “spoof.”

All I’m saying is, it’s not the second coming of Jesus. It’s not even the third coming of Jesus, when he is just trying to get attention. It’s not Prince coming to your house and writing songs about you for his new album. It’s just a funny comedy to watch once and then move on with your life, trying to do good deeds in the world, etc. In my opinion.

I guess with SHAUN OF THE DEAD my problem is a horror purist thing. Mixing comedy and horror is like mixing dangerous chemicals. You gotta do it just right or you’re gonna end up running down the street on fire like Richard Pryor. There are very few movies that mix a high volume of laughs without dilluting the horror. I would say AMERICAN WEREWOLF IN LONDON is the all time #1 perfect ratio for that mix. EVIL DEAD 2 is #2. RETURN OF THE LIVING DEAD comes close but the punk rockers push it too far, some comedy drips down the side and burns off the skin on the side of your hand. SHAUN OF THE DEAD is not trying to be that kind of movie, but I guess that’s the kind of movie I’m looking for. Do you want to listen to “Weird Al” Yankovic or do you want to listen to real music? That’s an unfair comparison, but I gotta speak from my heart, friends. It’s a good comedy but they put those zombies in there and it just reminds me that I’d rather be watching a real zombie movie. That’s my bias, that’s my weakness, that’s my curse. The curse of the zombie.

That said, I liked SHAUN OF THE DEAD, and I like this HOT FUZZ too. This one is a tribute to another genre close to my soul, the ’80s and ’90s action movie. Specifically they are dealing with cop movies (not as much my thing) and the two movies most directly referenced are POINT BREAK (good choice) and BAD BOYS 2 (the only movie ever made that irrefutably proves the existence of the Devil).

The gimmick is that Simon Pegg is this tough cop from London who gets transferred to a village too small for him, partners with Nick Frost as a dumbass obsessed with cop movies, and together they end up wrapped in a murder case that leads them into big over-the-top shootouts and car chases like in those movies. The story really takes it’s time, the laughs are pretty low key and infrequent for a while, but they really cleverly build up all these details that lead to the big action movie third act and it gets alot better as it approaches its destination.

The movie is not entirely pure action movie. The villain is a mysterious hooded killer, so it’s not exactly Hans Grueber or somebody. It works in a couple tributes to THE WICKER MAN and spaghetti westerns and stuff, which kind of muddies the waters. But it doesn’t get too far off track. What I really appreciate is the attention to detail in their action movie tribute. There is alot of Bruckheimer/Tony Scott type shit in the style of the movie, even though its much smaller and Britisher. Early on, even before it becomes an action movie, they have some pretty funny Avid fart parodies complete with the the door slamming and flashbulb sound effects and everything. At the end they have the perfect metallic title logo that slams on the screen. And they have lots of elements to the plot that they could’ve left out but they didn’t because they knew this is what would be done in a cop movie, so for example you gotta have about 4 fake endings and the part where it’s one year later and they go to visit a grave.

The action scenes pay tribute to that Bruckheimery style, lots of quick cuts and closeups and shit, but strangely they make the scenes more clear and therefore more exciting than some of the scenes they’re homaging. I guess they’re looking at some of the better ones too, like there’s a foot chase where they must’ve studied the foot chase in POINT BREAK for tips.

Also I gotta admit they buttered me up a little by including a copy of OUT FOR JUSTICE in a collection of cop movies that inspire the heroes. (HARD TO KILL was in there somewhere too, according to the credits.)

Anyway I’m not gonna spend too much time on this one, but it’s worth seeing.

Edgar Wright Edward Woodward Jim Broadbent Nick Frost Paddy Considine Simon Pegg Timothy Dalton
This entry was posted on Saturday, April 28th, 2007 at 11:52 pm and is filed under Action, Comedy/Laffs, Reviews. You can follow any responses to this entry through the RSS 2.0 feed. You can leave a response, or trackback from your own site.