Bad (a film by Martin Scorsese)

It’s Michael Jackson’s birthday. Would’ve been his 51st, and if all had gone perfect he would’ve been 17 shows into his run at the 02 in London. Hard to picture. It really feels to me like this country is going through a time of massive change, like the tectonic plates are shifting beneath us. It figures that the same year we have our first black president we also have to lose Michael and the last Kennedy brother. All earlier than I expected, but maybe we’re ahead of schedule. The big live news events of the year: an inauguration and two memorial services. And both Kennedy and MJ instantly reborn as beloved legends.

Now you’re really gonna think I’m a weirdo (though I’ve never owned a chimp) but the truth is I would’ve known it was Michael’s birthday anyway. For some reason it’s a date I always remember, so I usually watch at least a little bit of MOONWALKER. But this year, during all the mourning and memorializing, I picked up the MICHAEL JACKSON VIDEO GREATEST HITS – HISTORY dvd. I had been obsessing over the dancing in his videos. MTV had a marathon, but they kept showing the shorter versions. I was jonesing to see that scene they cut out of “Black Or White” where he smashes the car while grabbing his crotch and yelling. It’s on this DVD (the cover calls it “the controversial ‘Panther’ version”).

But the highlight for me was the “never-before-seen 18-minute long version of ‘Bad’.” 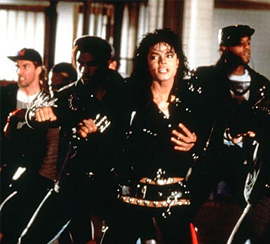 I bet you remember this Martin Scorsese directed dance extravaganza in a New York subway station. Michael, dressed in strap-and-buckle-covered black leather like on the album cover, leads a gang of dancers/street toughs in a face off with rivals. They jump the turnstiles, run around hollering like lost boys, one guy roller skates. “BAD” is spraypainted on a wall, a wanted poster of Scorsese is torn down, a vent cover is torn off so their hair can blow around and look cool. Michael does his best “bad” face and even works some old school kung fu taunts into his routine – a “come here” hand gesture, a wipe of his lips as if rubbing off… blood? Sweat? Drool? It all fits in well with the “whoosh” sound effects that happen every time they whip their heads or flail their arms or spin around, which is many times. Another subtle use of sound effects: they actually add in the sound of all those buckles rattling around as he dances. Maybe that’s to match up with the later acappela part where you hear their real stomping and shifting along with his improvised singing about the other guys “doin’ wrong.”

And at the end you keep seeing Wesley Snipes (looking like Tupac in JUICE) and two other guys standing there watching, their faces showing that they’re not amused.

I’m not sure if you even see Wesley in the shortened version, but I remembered it from ’80s MTV, that he’s the one Michael wants to “ask once again who’s bad.” What I didn’t remember, and it sounds like maybe I’d never seen, was the full ten minute intro that sets up this whole conflict between Michael and Wesley.

In this version it’s not as surprising that it’s directed by Scorsese. It’s like the start of a lost ’80s gem, a real movie with opening credits and a keyboard score. It’s shot in gritty B&W like RAGING BULL (same cinematographer, in fact) and it’s written by Richard Price, the novelist and screenwriter who did THE COLOR OF MONEY, CLOCKERS, five episodes of THE WIRE, etc. It’s inspired by the true story of a private school kid who was shot while mugging a plain-clothes cop. (I might have to review the TV movie of that.)

Michael plays Darryl, a kid going to a predominantly white private high school called The Duxton School. The other kids are nice to him, but condescendingly so. One kid tells him he’s proud of how well he’s been doing, and gives him a high five.

We see his long subway commute back to his neighborhood. All the white kids get off long before he does. A Latino kid who’s also in his class asks him, “How many guys proud of you?”

“Shoot. Four guys proud of me.”

It’s kind of a shock to see Michael’s face on the body of a regular person. No armbands, badges or shoulder pads, no sequins. Just a grey hoodie and gloves – two gloves, to keep his hands warm. He never could’ve pulled that look off later on, after more surgeries, but here it works. It’s like yeah, what if? What if Michael were an inner city youth? Never became a star. Moved from Gary to NYC. This could’ve been him. And he’s doing more acting than in anything else, and it works.

I’ve read that Michael always wanted to be a movie star, and was disappointed that it never came about. He’s such an icon, such a superstar, such a unique physical specimen, that at first it seems funny to imagine him trying to be different people. But if you think about it, why not? Elvis did it. I wish Michael made a bunch of crazy musicals where his unique personality was put into different jobs and eras and situations. A GI, a sailor, an Egyptologist, whatever. A cop. He used to talk about an Edgar Alan Poe biopic, I was always excited to see that, even though I think he wanted to do a serious drama and not a musical. I never was sure.

But oh well. Would’ve been great to have movies like that, but instead he made these. He got to be directed by John Landis, David Fincher, Francis Ford Copolla. And, uh, the guy who did TEENAGE MUTANT NINJA TURTLES. But here he’s directed by Scorsese, and you can tell. 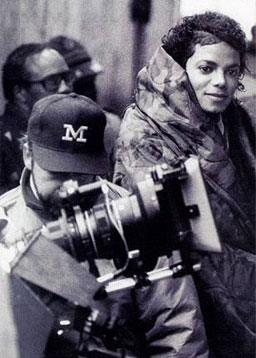 Scorsese brought out the natural actor in Michael. I mean, Michael did so much acting in his life: as a little kid he was singing about relationships, on stage he was acting happy, later acting tough. In this ten minute intro he gets to do more traditional acting: he stares out windows thoughtfully, he laughs, he tries to fit in, he gets upset.

When Darryl gets back home it’s a rough neighborhood – a drug dealer (Paul Calderon from PULP FICTION and PISTOL WHIPPED) pulls a gun on him and his friends for staring. He hangs out with Wesley and “the fellas” from the neighborhood. They welcome him back from school and seem like they genuinely like him, but underneath there’s a hostility. They tease him, call him “Joe College.” They imply that he’s uppity for spending most of his year living with those rich white kids.

In real life, especially around this time, people were getting upset at Michael for lightening his skin and shrinking his nose. He started to look different and alot of people took that as him denying his black heritage, hiding it, wanting to be white. It’s a justified fear but at the same time, looking at this video, how can you say he’s hiding his blackness? He went out of his way to give himself this rough inner-city upbringing that he never really had. And you could say the same of “Beat It” and “The Way You Make Me Feel” (which also has a slightly extended cut on this DVD).

I think the video shows how he felt about his race: he was stuck between two worlds, not feeling like he fit into either one. The white kids can’t forget Darryl is black, but his black friends think his life is too white. And he tries to be friends with both but neither understand what he’s going through.

Wesley (whose character is named “Mini-Max” according to IMDb) especially resents Darryl’s education and tries to make him feel bad about it, pressuring him to “go for a walk” to mug people in the subway. Michael decides to prove he’s “bad” and takes the lead in mugging an old man. Either he almost goes through with it and changes his mind or he just wants to interfere with Mini-Max’s plan. He tells the old man to run away. Mini-Max feels betrayed, they get into an argument and Darryl’s way of proving that he’s bad is it switches to color, he’s got the leather and a crazy mullet, and he dances in the way we all remember.

At the end, after observing all of this, Mini-Max gives a long, unimpressed stare. Then he says, “So that’s the way it goes down, huh?” and gives Darryl a pound. He raises his eyebrows as he walks away as if to say “what the fuck was that!?,” but the point is that he has decided to accept Darryl – who we now see standing there in black and white with the hoodie.

So it changes the whole meaning of the video, at least from how I remembered it. I always thought Wesley was some bully and Michael had to prove to him that he was bad. Enemies, like the guys in “Beat It” that Michael had to come between to break it up. But in the full length version you know that they’re actually friends. They have differences, but they’re working them out here. He’s earning Wesley’s respect.

See, the color part didn’t necessarily literally happen, it’s a fantasy or a metaphor or something. It shows Darryl/Michael’s true self, the tough guy with the Peter Pan face, the dancer doing James Brown and ballet moves, the guy reinventing dancing and videos and film and music and himself. Instead of going along with the fellas and doing something he believes is wrong he has to stand up for himself, show them his true self. And they may not think it’s cool, they may not understand it, but they will be overwhelmed by its badness and be forced to accept it. And then they’ll just shake their heads and beat it.

Martin Scorsese Michael Jackson Paul Calderon Wesley Snipes
This entry was posted on Saturday, August 29th, 2009 at 4:58 pm and is filed under Musical, Reviews. You can follow any responses to this entry through the RSS 2.0 feed. You can leave a response, or trackback from your own site.

40 Responses to “Bad (a film by Martin Scorsese)”