The Spook Who Sat By the Door 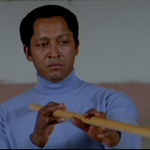 A senator’s polls say he needs more of “the Negro vote” to win re-election, so his strategist suggests accusing the CIA of discriminatory hiring policies. Cut to the CIA considering hundreds of black men as candidates and narrowing them down to 10 men in their training course.

They teach them to shoot, car bomb, collapse bridges, sky dive, scuba dive, judo, etc. But you only need one token to play Ms. Pac-Man so only one of these guys gets through: the guy who doesn’t make any friends, who “has a habit of fading into the background.” So much so that you barely even notice him in these early scenes. Some other guy seems like he’s the main character. But this is the guy. His name is Freeman and he’s played by Lawrence Cook, who also had parts in TROUBLE MAN, COLORS and POSSE.

As the “first Negro officer in the Central Intelligence Agency,” a computer nominates him for the new position “Top Secret Reproduction Center Section Chief” (the guy who makes copies in the basement and occasionally is brought up to give tours to senators). After kissing white people’s asses for what we’re told is five years he quits, says he wants to become a social worker back home in Chicago. And the white people don’t try to stop him. They don’t care if he sticks around or not.

They probly should’ve paid more attention though. It turns out that by “become a social worker” he means “pick a fight with a bunch of thugs at a pool hall and then train them about fighting and explosives and shit and lead them in armed revolution against the government.” 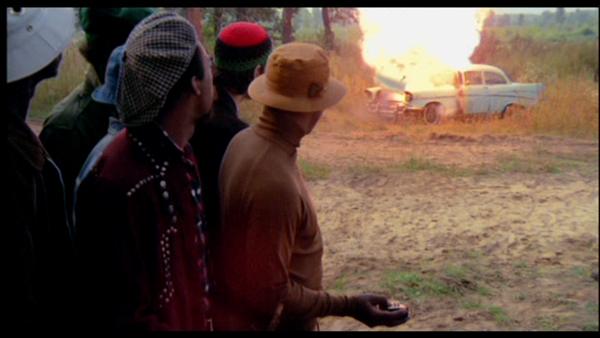 It’s not too long after the CIA training montages and now we have training montages in the hood. Freeman hardly talked to anybody back in Washington but here he’s preaching all kinds of strategic wisdom about the history of guerilla warfare and self empowerment and the CIA thing of everybody being trained in the three jobs above them so that if somebody dies everybody just moves up a slot. 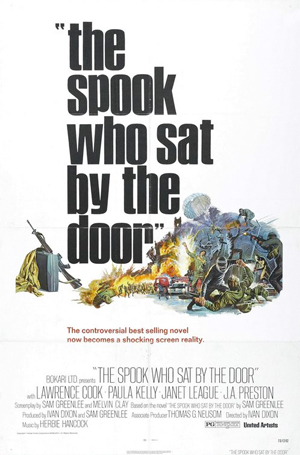 It seems kind of weird that he’s such an expert in everything just from taking that training program, but it’s okay because he tells a story about killing people in Korea. In the action movie code being a veteran means you can do anything.

Obviously this is about blowback. The idea is that he takes the CIA training and uses it against them, but to be fair to the CIA some of this is definitely shit that he figured out on his own. For example he teaches them that they can sneak into any place and be ignored by white people if they carry a broom or a mop.

They’re gonna need money, so he gets all the lightest skinned guys he knows – including Pretty Willie (David Lemieux) – a dude in a dashiki who I mistook for a white reggae fan but who’s offended by the idea of “passing” – to rob a bank in suits and fedoras so they seem white. 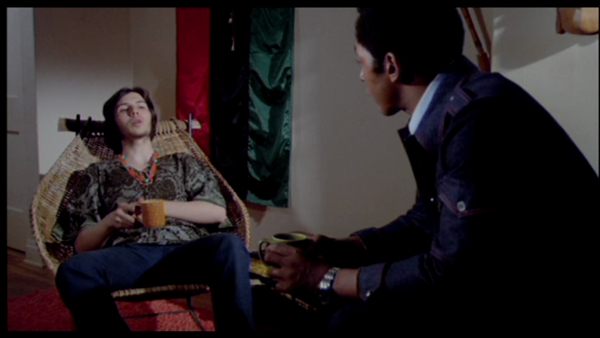 They’re also gonna need weapons, so they sneak a city bus into an army base and load it up with ammo, knowing that The Man will never believe black people would be smart enough to pull that off. “You see, this took brains and guts. Which we don’t have, right?”

But Freeman still has a Bruce Wayne job as a social worker, so when the neighborhood is close to rioting over white cops killing a black teenager he comes in and seemingly tries to calm things down. There’s also a black cop named Pete Dawes (J.A. Preston, judge from A FEW GOOD MEN) who he knows from college who he works with and who is so offended by the other cops bringing dogs to the scene that he pulls a gun on one of the dogs and threatens to shoot it. Shit turns Radio Raheem real quick and the National Guard are beating people with clubs and the usual type of shit.

That happens all the time, but what doesn’t usually happen is that the “Black Freedom Fighters of Chicago” “air condition” the Mayor’s office and take over the radio to warn the “pigs” and National Guard to leave and for “whitey” to get out of their neighborhood. And just to really fuck with them he gives himself the code name “Uncle Tom.”

Since the Guard don’t budge the freedom fighters arrange for the commanding officer to be found riding his bicycle in his underwear on acid and in blackface. SPOILER Then they shoot him, though. They’re not pranksters. 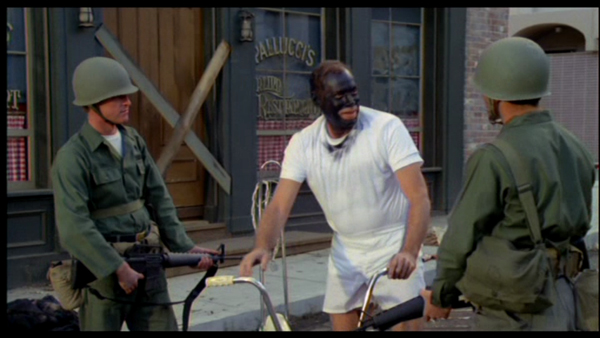 There are some laughs in the movie but they’re usually like that, they’re followed by something sobering. There’s a scene where two guys improvise a scene from a condescending “plantation movie” and do really funny imitations of degrading movie stereotypes. Freeman watches and laughs but then has to say a little righteous lesson about it afterwards, like an inspiring but humorless college professor. I guess one scene where they just let a laugh be a laugh is after they rob the bank and hear on the radio that the suspects are Caucasian males. They laugh because they pulled it off and because god damn, Freeman was right.

Eventually we cut to an office where a white general and his guy discuss the situation and why they can’t cut off the black neighborhood without crushing Chicago at large (black men are too important to the work force, for example they represent 90% of the garbage workers).

Meanwhile Freeman is in his girl’s fancy afrocentric apartment getting in an argument about the Freedom Fighters. She doesn’t know until figuring out right then that he’s their leader. She calls them “those people.” 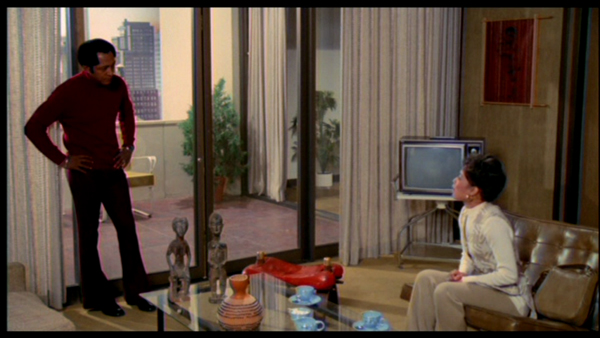 Even Dawes, when he goes to arrest Freeman, simply can’t believe that his old friend was master enough to mastermind this sophisticated operation. He keeps asking him “Who’s behind you?”

The thing that makes this amazing is that Freeman is not treated as an anti-hero. He’s treated as a straight up hero. It doesn’t end with some lip service to Freeman being wrong, or even have him die or be punished as a warning to people who want to follow in his footsteps. SPOILER it just ends with him having sparked a revolution, with attacks by black guerillas happening in eight other cities! I believe Freeman’s last line is “Remember, don’t quit until you either win or die.”

A movie like this, you gotta figure the director was some young rebel who saved up all his money and just did this one movie and then disappeared, or he did a couple before it and then was never allowed to work again after. Neither is the case at all. Director Ivan Dixon was not an indie/fringe upstart like Melvin Van Peebles or somebody, he was actually an actor from Hogan’s Heroes, one of the few black co-stars of a TV show in that era. Then he became an extremely prolific director, mostly in TV. The same guy who did this directed episodes of The Bill Cosby Show, The Mod Squad, The Waltons, Starsky and Hutch, Wonder Woman, The Rockford Files, The Greatest American Hero, The A-Team, Magnum P.I., Quantum Leap… he makes one of the most subversive movies I know of in the middle of a career as a full-on workman aiding in the creation of the most mainstream of pop culture. Movie-wise he was also responsible for TROUBLE MAN, a more normal blaxploitation movie which I remember very little about but I frequently listen to the soundtrack album by Marvin Gaye.

There’s some other respected talent on this one too. The soundtrack is by Herbie Hancock. It was his movie between BLOW-UP and DEATH WISH, but it’s more of a traditional blaxploitation funk score with lots of wah wah guitars and DOLEMITE-esque repetitive bass keyboard riffs and shit. Also, one of the two credited editors is Michael Kahn, who later won Oscars for editing RAIDERS OF THE LOST ARK, SCHINDLER’S LIST and SAVING PRIVATE RYAN, but it is widely believed that those were “career awards” given to him more for having done this movie than for those particular Spielberg pictures [citation needed].

But the most shocking thing is seeing a dashing young Eric Holder, future Attorney General of the United States, as one of the other CIA recruits: 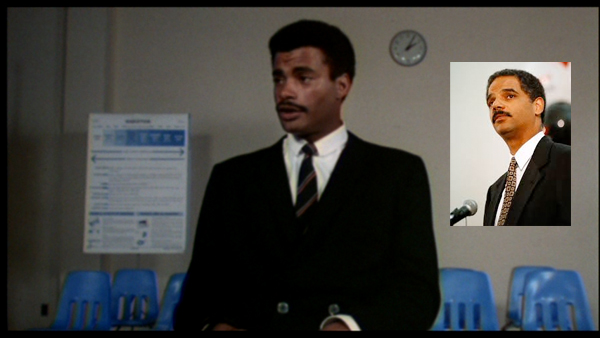 Nah, just fuckin with you, I just thought that guy looked kinda like Eric Holder. I love imagining the shit-fit that right wing pundits would have if that really was him and they found out about this movie. I mean, they wouldn’t be exaggerating in this case, this genuinely is a movie that advocates armed rebellion against the government. Okay, so far so good, but in this movie it’s black people doing it and the president is still white! So they would be against it!

I would just absolutely love to hear them describe this movie, explain what it is, say the title, choose clips to show and dialogue to quote, etc. It would be a beautiful, beautiful thing. They would have so many nightmares too. They would get scared every time a janitor went through the building.

It really is amazing that this movie somehow got made and released. There was a documentary made about it a few years ago called INFILTRATING HOLLYWOOD, where I guess they tell stories about prints mysteriously disappearing and shit. Probly just misplaced, I’m sure. Of course I don’t believe in censorship but here is the rare case where you can kind of see why The Man would want to do that.

At the same time it’s kinda funny to think that in 1989 some supposedly reasonable white writers publicly worried that DO THE RIGHT THING would cause riots. Yet this movie that straight up glorifies and gives tips on insurrection was released in theaters and nothing happened. As if maybe we’re taking this business a little too seriously. Or as if maybe you should assume movie viewers have human brains and don’t just mindlessly mimic what they see in movies.

Like COTTON COMES TO HARLEM, this is one that I always knew the title of without understanding what it meant. I mean I got that it was a double meaning of the racial slur and the slang term for a spy. But I thought he was literally sitting by the door, perhaps to make a quick exit. In fact this refers to the idea of him being a token minority hire at the CIA. He “sits by the door” so that people will look in and see him and and figure there is racial equality and shit going on inside. But really all that’s in there is a ticking time bomb who makes copies.

It would also be cool if there was a remake or alternate ending where it’s a triple meaning because he’s also a ghost. Or maybe there is a way to interpret this one that he’s a ghost and I just didn’t pick up on it.

Anyway, ghosts or not this has gotta be the most openly militant movie I’ve seen. It’s impressive.

blaxploitation Herbie Hancock Ivan Dixon J.A. Preston Lawrence Cook Michael Kahn
This entry was posted on Wednesday, February 26th, 2014 at 1:01 am and is filed under Action, Reviews. You can follow any responses to this entry through the RSS 2.0 feed. You can skip to the end and leave a response. Pinging is currently not allowed.

15 Responses to “The Spook Who Sat By the Door”