TEEN WOLF is the story of a teen who turns into a wolf. But he looks more like those cavemen from the commercials, or the “dog-faced boy” from the cover of that old video about the different “freaks” (see diagram).

Michael J. Fox (CLASS OF 1989) plays Scott Howard, a weiner who has the hots for some bitch who hates him and who doesn’t notice that his female best friend adores him. To be fair her name is Boof so you can see why he wouldn’t take her that seriously, but still. One day when he gets a 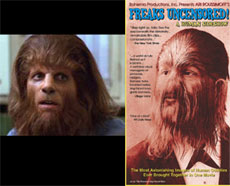 boner it brings out the changes in his body and then when there’s a full moon he turns into a wolf. So his dad reveals to him that he also is a wolf, an Adult Wolf, because it’s just this harmless thing that runs in the family.

That doesn’t comfort Scott. He’s real worried and embarrassed, but then he gets upset during a basketball game and wolfs out, and it makes him really good. Ain’t no rule says a werewolf can’t play basketball.

Being good at sports is the best thing anybody could do, so everybody accepts this wolf thing and thinks he’s cool now. They lift him up like a champion, bring him to the diner, chant his name. People cheer him on wherever he goes, they high five him. Being a teen wolf seems very similar to being Arsenio Hall. Also there’s a part where he spontaneously starts breakdancing in the hallway at school. 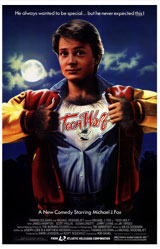 It’s implied that he has some kind of pheremones or something that cause some kind of an animal magnetism with the ladies. Before long he’s on the floor of the dressing room having unprotected sex with the girl from the school play who wouldn’t talk to him before. You know how girls love fuckin wolves. We’ve all seen it. Come on man, I’m just saying what everybody’s thinkin. You think that dog boy on the front of the video was lonely? No way. These are the facts.

TEEN WOLF immediately abandons any traditional elements of a werewolf movie: no talk of full moons, silver bullets, infectious werewolf bites or gypsy curses. No attempts to cure himself, no worry about losing control and killing somebody, or waking up naked with goat intestines on his breath. It doesn’t even deal with him being an outcast. Take out the “wolf” part and you have the typical ’80s teen story of a nerd becoming popular and then getting full of himself and becoming a jerk, and then at the end he realizes he should be true to himself so he stops turning into a wolf, becomes less popular, but manages to still win the basketball game and fall in love with the best friend. Phew.

But is that really being true to himself? I don’t think so, because the wolf is part of him, it’s part of his family heritage. His dad is proud of being a wolf. And it’s pretty amazing that in this small town the people are not only accepting of a teen wolf, but love him and buy t-shirts promoting him. Maybe that’s condescending, like suburban white kids mimicking L.A. gang culture, but they mean well, I would say it is very liberal for a small town. But the dad didn’t know that, so imagine all the torment he must’ve had, hiding this secret all these years, even from his own son. Scott has actually done a great thing by showing his dad that he can be open about being a werewolf. But then he shits all over that by deciding he doesn’t want “the wolf” and refusing to use it. Suppressing it.

Plus there’s the whole issue of his mom, which isn’t really dealt with. His mom is dead, we don’t know why, but at one point the bad guy (one of the few people in town who hates teen wolves) says “I’ve handled your kind before. Your mama used to steal chickens out of the backyard until I blew her head off with a shotgun.” I mean, if that’s supposed to be a “yo momma” joke it’s a pretty weird one. I think he might be telling the truth. On the other hand, dealing with a teen wolf for the first time opens up weird new “yo momma” possibilities and he might just be getting used to that, feeling his way around with this your-mom-eating-my-chickens concept, and it just didn’t come off right maybe. It’s hard to say. But if I had to guess I’d say this really is the guy who murdered Scott’s mom in cold blood and is proud of it and just revealed it and bragged about it. So I really hope Scott wins the basketball game, that would even things out a bit, wouldn’t it?

And his friend Lewis – this is a weird one, but if you’ve seen the movie maybe you can explain it to me. He has two guys he hangs out with at the beginning, Stiles and Lewis. Lewis doesn’t talk much, and then when Scott becomes a teen wolf Lewis looks upset, then doesn’t hang out with them anymore. Scott asks Stiles why and Stiles changes the subject. What’s the deal? Is Lewis lupophobic? Did he actually/also have chickens stolen by Scott’s mom and is just now putting two and two together? Is he a Teen Chicken? It’s never addressed. All left up for poetic interpretation, I guess.

Scott has another friend named “Chubby,” played by Mark Holton (Francis from PEE-WEE’S BIG ADVENTURE). It seems mean that his name is Chubby, but don’t worry, his friends just call him “Chub” for short. So even though they’re constantly reminding him he’s a fatass at least it’s a shortened name, that means it’s affectionate.

I also want to bring up this character Stiles. I’m having trouble wrapping my head around him. It seems like he’s constantly trying to hustle everybody and that you’re supposed to find that charming. He’s like this kind of obnoxious Jeremy Piven/door-to-door salesman type who wears t-shirts with wacky sayings and goes through a bunch of trouble to try to get a keg to bring to a party, so he can be cool. When he gets there nobody’s impressed because there are a bunch of kegs already there. But then all the sudden it doesn’t matter because he’s basically the host of the party, and everyone watches him as he jokes around and presents a series of makeout games for everybody to play. I guess he’s kind of a Ferris Bueller type of kid who can do anything so he creates a line of Teen Wolf merchandise, paints a wolf logo on the side of a delivery truck and enjoys a hobby of risking death or paralysis by moronically “surfing” on top of his moving vehicle while playing Beach Boys songs loudly on the stereo. I don’t think we’ll be seeing him alive at the high school reunion.

I should give credit where credit is due: there were two lines that intentionally made me laugh. One of them was from the Dad Wolf:

Teen Wolf: I was with Stiles this afternoon.
Dad: I know.
Teen Wolf: You saw?
Dad: Yeah, I saw, unless that was another werewolf doing a handstand on top of Stiles’ wolfmobile and making a fool of himself.

So there’s a couple small laughs. But I have to warn you, this movie is NOT scary. It just doesn’t have any atmosphere, no tension. It doesn’t take the mythology seriously enough for there to be anything at stake as far as– Nah, just jerkin your chain, obviously it’s not supposed to be a horror movie. But I think it’s funny that the music on the opening credits do sound like it’s trying to be scary.

It’s actually kind of a slipup as far as a high concept goes – the title TEEN WOLF just makes it sound like an update of I WAS A TEENAGE WEREWOLF. It only communicates the concept of a teenage werewolf. But in reality the hook here is not that he’s a teen, it’s that he plays basketball. What I’m saying is that it should be called WEREHOOPS.

Years ago a buddy told me that TEEN WOLF movie was about puberty. There’s obviously a parallel there, he’s a squeaky-voiced kid in high school whose body goes through changes and it makes him more aggressive and successful with girls. In fact, when he tries to talk to the coach about what’s happening to him the coach thinks that’s what he’s talking about, late puberty. But it doesn’t hold up as a metaphor because why would he be the only one? Why would it make him special? Why would the whole school worship him, just for growing some pubes?

There’s another hint when he decides to come out of the closet to Stiles:

As many things haven’t changed since 1985 at least that one did. I don’t think you’d see somebody talking like that in a movie now. Like no no, jesus no, I’m not gay! Nothing weird like that. Don’t be silly. I just have the power to turn into a basketball playing wolfman. Gay! I can’t believe you thought that. No way.

But it does kind of bring to mind that parallel, and I had already thought of it anyway. He’s got this secret that he’s at first scared of and ashamed by, but he can’t help it. And he’s afraid to tell his best friend. But of course that analogy doesn’t hold up either because being gay doesn’t pass down from your parents. Or turn you instantly into the most popular kid in school. Or make you good at basketball.

Wait a minute, could this be another uncomfortable race comedy like SOUL MAN? Like being a werewolf symbolizes that he has some African ancestry? Come to think of it the plot is somewhat similar, down to the girl using him for sex because of his fake blackness/teen wolf powers… but no, I don’t think that works either.

Okay, as far as I can tell TEEN WOLF is not about anything, I guess that’s not a crime. It is weird thought because it really seems like a story that lends itself to some subtext. It seems like an opportunity to say something about what it’s like to be that age. But really it’s just about wolves being good at basketball. Oh well.

The director is Rod Daniel (K-9, HOME ALONE 4) and the script was by Joseph Loeb III and Matthew Weisman. They also wrote the much better COMMANDO, and Loeb changed his name to Jeph Loeb and writes comics books now. I’m not sure if he got kicked out of movies or something, but that’s where he is now.

Of course, this was followed by a sequel called TEEN WOLF TOO which I will be reviewing soon. And apparently they’re working on turning it into a TV series for MTV. If that doesn’t work out (and let’s face it, it won’t) I think they should consider a series of DTV children’s movie spin-offs called FURBALLS, about soccer playing werewolf cubs.

cheesy '80s comedies Michael J. Fox werewolves
This entry was posted on Monday, September 14th, 2009 at 12:09 pm and is filed under Comedy/Laffs, Reviews. You can follow any responses to this entry through the RSS 2.0 feed. You can leave a response, or trackback from your own site.