Man, DAYBREAKERS was not what I expected. I heard some good things (all of it from commenters here) and I had high hopes for a dumb-but-fun B movie. But I’d also seen pictures of Willem Dafoe with a crossbow so I thought maybe it had a pretty cool concept of a world populated by civilized vampires, but that it would then go into a familiar vampire hunting drill that hopefully wouldn’t pale too bad in comparison to BLADE and VAMPIRES.

But it’s not that type of movie at all. The crossbow is strictly for self defense. I was even wrong about who the main character in the movie would be. 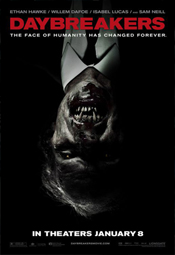 The story takes place in something like the world Deacon Frost was trying to create in BLADE. Vampires openly run the world. Society is nocturnal, cars are equipped with UV-blocking windows and video mirrors (since vampires have no reflections). The models on billboards and the anchors on TV have fangs and glimmering eyes. Coffee comes with blood mixed in. Humans are a rare sight – they’ve either gotten turned or been captured to be farmed for blood.

Of course, you see the problem there: dwindling supply. These vampires can live pretty normal (but immortal) lives when they’re drinking blood, but if they don’t get enough (or especially if they drink blood from another vampire) they start to mutate into bat monsters. Ethan Hawke plays a corporate hematologist desperate to find a substitute for blood before the world supply runs dry in about a month. Unfortunately the stuff they’re testing is disastrous. It’s not looking good for the vampires, and therefore the human race, since vampires are about all that’s left of it.

Then one day he literally runs into some fugitive humans and, being a liberal, helps them elude authorities out of the kindness of his no longer beating heart. Next thing you know he’s pulled into a plan to save the human race, not by creating a product to sell to them but by curing vampirism.

I guess in the advertising they had a hard time expressing how smart and unique this was, because you see a bat monster or whatever you’re gonna make assumptions. But what I really like is that this is not at all like the other vampire movies. The vampires are not evil. The humans are not hunting vampires. The main character is not a warrior. He questions the ethics of the vampire establishment, but he lives as upper class with a sleek car and a fancy home and discomfort with his brother who’s in the military and brings him a bottle of pure human blood for his birthday. He’s technically a monster but he reacts to violence the way most people would. When the humans shoot an arrow into his arm he doesn’t hiss at them, he begs for them to please not to shoot at him again.

Probly my favorite scene is when one of the bat monsters storms his house and attacks. Him and his brother fight it, decapitate it, like a regular horror movie. But then the police come and file a report, call it a “home invasion,” and his co-workers ask if he’s doing all right and everything. He finds out who the monster was and feels bad about what happened. In this world they live in it’s the equivalent of if some homeless man broke into their house or something. It’s not supernatural, it’s just sad.

There’s some pretty good action and suspense here and there, but it’s really not an action movie. It’s more of a thriller within this world of vampires. There are many details to this world (for example you see kids smoking or drinking coffee, because they’re actually old) but the movie’s real good about showing us this stuff more than telling. There are some news reports that explain things but mostly the movie is content to be quiet and even subtle. It had won me over already before anything really happened, it was just showing him going to work on the subway and visually establishing what this world is like and what the rules of the vampires are (sun will kill them, they drink blood, they don’t have reflections, etc. No word on garlic or crosses, though).

This movie made me realize that you know what man, I kind of like Ethan Hawke. I mean, in movies. I don’t know the guy, and I wouldn’t have crossed Beatrix Kiddo the way he did according to the gossipologists. But I think he’s kind of an underappreciated actor. I always thought he didn’t get enough credit for being put-upon by Denzel in TRAINING DAY, and he was real good in a more showy role in BROOKLYN’S FINEST. In this one he’s good too, and kind of hilarious in the way he looks going to work wearing a spooky black hat and suit. He looks exactly at the halfway mark between businessman-who-doesn’t-get-enough-sleep and fucking-Nosferatu. You can’t really tell which one is him. Or maybe it’s both.

A buddy of mine who didn’t like DAYBREAKERS called it “dry,” which I’d say is pretty accurate and the last thing I would’ve expected. It’s that rare modern genre movie that’s not constantly trying to poke and prod you to be excited. And although it does have a sense of humor it’s not jokey or smart alecky, it maintains total seriousness. And it ignores what is expected of a vampire movie, it’s not interested in that.

My friend complained about the vampires not having increased strength or hearing or anything, they were too much just like people. But I think he’s missing the point on that because that’s the beauty of it. This is that thing I love so much, the genre movie full of cool shit that also says something about the real world. Obviously there’s a metaphor about our society being stupidly based on resources that aren’t gonna last forever. And there’s the whole deal of this corporation that he works for wanting what’s most profitable instead of what’s best for humanity.

But I think there’s so much more in here. There’s the class tension, the haves turning their backs on the have-nots, with the added convenience of them being literally dehumanized. That could be me getting cattle-prodded by the cops, but it’s not me so I’ll try not to think about that it could be me and enjoy my blood-coffee. There’s the political tension between the brothers, the way they have this family bond but have disagreements about how the world needs to work, and they end up on different sides and it pushes them apart. And it shows how sad and pointless that is.

Hawke’s character gets into some shit for just not believing in something. I guess he could be like a vegetarian in a family of cattle ranchers. His brother tries to pressure him to drink blood, but it’s against his ethics.

Of all the truths this reflects about the world we live in (which is ironic because vampires have no reflections) I think the biggest point is about the way we adjust to the most horrible shit, and it becomes normal. Here is a world where everybody has turned into bloodsuckers, and if you don’t drink enough human blood your ears will grow, and there are monsters fighting in the sewers that might’ve been your neighbors, and everybody’s used to this. If society agrees that it’s okay to be monsters then I guess it’s okay to be monsters. They just don’t think about it, they’re completely oblivious.

So, I don’t know if the world is ready for this movie yet, but I was. It’s just my speed. I’m sure everybody else will catch up eventually.

Ethan Hawke Sam Neill vampires Willem Dafoe
This entry was posted on Tuesday, May 11th, 2010 at 1:46 am and is filed under Horror, Reviews. You can follow any responses to this entry through the RSS 2.0 feed. You can leave a response, or trackback from your own site.