We here in Seattle are very proud of Bruce Lee. We claim him as our own. He’s one of our icons like Jimi, Cobain, and… well, I’m not gonna say Sir Mix-a-lot. I don’t know. Quincy Jones?

Of course, Bruce was born in San Francisco, raised in Hong Kong, filmed his movies in Hong Kong. He only lived here for about 5 years. But I think it’s fair to say they were important years. Any biography of Bruce mentions that he studied philosophy, right? Well that was right here at our University of Washington. He actually majored in drama, so give us partial credit for his acting too. He started his first kung fu schools here. He met his wife here. He married her here. When he died his family still lived here, so he’s buried here, and so is Brandon. We still don’t have a Bruce Lee statue, but Linda and Shannon Lee are trying to build The Bruce Lee Action Museum here. So we got a legitimate claim, I think. We are a Bruce Lee town.

That’s why it’s so embarrassing that some dumb motherfuckers dropped the ball and got us completely erased from this biopic. 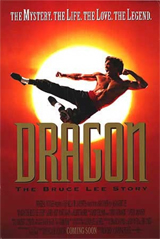 The University wouldn’t let them film on campus because the script depicted one UW athlete being racist toward Bruce. That seems like denial. I have a hard time believing things like that never happened to him. But more importantly, Bruce hands the racist’s ass to him (here you go – I think you dropped this) and in the very next scene the guy and all his friends are converted into Bruce’s students. The movie hardly dwells on racism. It portrays his college years as a good experience.

But somebody said no, and according to the commentary track by director Rob Cohen (DRAGONHEART, THE MUMMY: TOMB OF THE DRAGON EMPEROR, THE FAST AND THE DRAGON FURIOUS) the city of Seattle wasn’t very cooperative either. So he got pissed and rewrote the script (and history). In the movie Bruce goes to college in California, Linda is a California girl, and some version of Ruby Chow (famous restaurant owner and politician in Seattle) is in San Francisco’s Chinatown instead of ours. Oh well, they’re basically the same – liberal west coast port cities where Bruce Lee had schools. Smash together DIRTY HARRY and McQ.

It makes me sad that they didn’t film in Seattle, but I guess it’s no big deal because it doesn’t seem like too many people remember this one anyway, or have any respect for it. They complain about all the Hollywood bullshit. It gives him fictional fights – an alley brawl with the cooks at Ruby Chow’s (with him balancing on a wire and dodging cleavers), one with American sailors (where he does a flip and perches nimbly on a table like Spiderman), a huge grudge match on the set of THE BIG BOSS (captured on film but then he destroys it), and even some nightmares or visions where he’s chased by an armored demon (Sven Ole-Thorsen). The part that seems the most like Hollywood bullshit is the duel for the right to teach kung fu to non-Chinese students, but that’s based on a real event. Of course, the movie still has to set it in a spooky BLOODSPORT type temple instead of a normal martial arts studio, and they make it the source of his debilitating back injury (actually caused by weightlifting) and create dramatic conflict by having him hide it from his wife (in real life she was there).

Despite all this I really like DRAGON and think people are too hard on it. I mean have you seen any of the Hong Kong Bruce Lee biopics? Because the Hong Kong bullshit is worse than the Hollywood bullshit. BRUCE LEE: THE MAN/THE MYTH for example just has him getting in a bunch of fights to prove that Chinese kung fu is better than the fighting techniques of other countries. Then at the end it says that he might’ve faked his death and will come back in 1983. This has less lies and more truth. Compared to those movies DRAGON seems like the Maysles brothers followed Bruce around and filmed his whole life. Yeah, so it has some silly exaggerations about the type of life he lived. But it also shows him as a fully dimensional human being. It shows his family life, his philosophy, his rebellion against tradition, his struggle to become a leading man despite Hollywood small-mindedness and racism. It shows some difficulties with being in an interracial relationship in America of the 1960s.

The script is based mostly on Linda Lee’s book The Bruce Lee Only I Knew, so it really does show sides of him nobody else had bothered to show before, and (through Lauren Holly as Linda) it shows a female perspective of Bruce as boyfriend, husband, lover and father. It’s the rare Hollywood movie with a love scene between a white woman and Asian man. It’s not only about why he’s awesome, but why she loved him.

I mean, they try to show him being awesome too. The fight scenes are fun and well shot, although it’s kind of weird that they’re supposed to be real life but use a more exaggerated style than what Lee tried to do in his movies. For example the first one has Bruce doing a flip and tearing his shirt off Incredible Hulk style. But they do pay tribute to many of Bruce’s moves and weapons (of course they got him using nunchakas and wooden staffs). Although they could be a more accurate depiction of his fights I don’t agree with the complaints about them being in the movie. I personally believe that all biopics would be improved by adding 5 or 6 kung fu scenes, and here’s a rare example where it makes sense. I mean admit it, RAY wasn’t bad, but we’d all own the DVD if it had a bunch of sword fights and stuff.

As a tribute to all the other Bruce Lee imitators, Jason Scott Lee doesn’t look very much like Bruce Lee at all. But he strays from their tradition by actually trying to imitate him. Somehow with his facial expressions and poses he makes a believable (if bulkier and rounder-faced) Bruce Lee. Jason Scott not only had to imitate Bruce’s Jeet Kune Do, he also had to recreate his charm and chemistry with his wife and the pain of his struggle to make it in America. Like Will Smith in ALI he has a thankless job, trying the impossible feat of portraying an iconic human force whose presence and charisma are impossible to duplicate. But I think he does an impressive job and deserves much more credit for this performance than he ever got. And for Christ’s sake somebody give him some good movies to be in. He’s a good actor.

The movie very intentionally ends on the set of ENTER THE DRAGON and doesn’t show his death or deal with the rumors about what he was up to and what caused it and all that. It’s true, there’s no reason at this point to dwell on his death. This movie celebrates what he accomplished in his short life, and it makes it clear that his spirit is still out there. He had an enormous impact on the martial arts (especially what we now call MMA), on martial arts movies, on the careers of Asian actors in western countries, maybe even on racial relations in general. And just as Bruce Lee’s spirit lives on in our hearts, DRAGON: THE BRUCE LEE STORY’s theme song lives on in our trailers and inspirational sports broadcasts. Examples below.

starting about 1 minute in:

and there’s this one:

biopic Bruce Lee Jason Scott Lee Rob Cohen
This entry was posted on Wednesday, May 26th, 2010 at 10:20 pm and is filed under Drama, Martial Arts, Reviews. You can follow any responses to this entry through the RSS 2.0 feed. You can leave a response, or trackback from your own site.