Well, whattya know? PREDATORS really is a good old fashioned action movie in the tradition of PREDATOR. Whichever corporate overlord holds the deed to the PREDATOR licensed property seems to be taking a temporary break from the “make sure they know we just want their money” policy that was in place for the two cheesy movies where the PREDATOR predators and the ALIEN aliens all got humiliated together fighting that pizza delivery boy at the pool party or whatever.

The movie begins with THE PIANIST himself, Adrien Brody, dropping from the sky. He just wakes up mid-air, hurtling toward an unknown jungle, no idea how he got here, and luckily finds that he has some kind of small parachute contraption attached to him. We’ve all been there, so it’s a real relatable way to start a movie.

He quickly finds out that he’s not the only one being dumped here. He’s some kind of elite mercenary and most of these other people are soldiers of some kind, military, guerilla or criminal. It’s a CUBE type setup: they try to figure out what the fuck is happening, then give up and try to figure out how to get the fuck out of here. And after a while some of those Predators come after them. 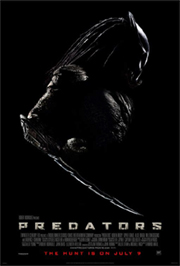 As you probly heard this is produced by Robert Rodriguez, sort of based on the PREDATOR 3 he wrote back in the DESPERADO promising young filmatist days. The direction is by Nimrod Antal (KONTROL, VACANCY, ARMORED), the script is by Alex Litvak (special thanks on an extra on the MASKED & ANONYMOUS dvd) and Michael Finch (no previous credits), and it’s produced at Rodriguez’s Troublemaker Studios.  All this seemed iffy. I thought ARMORED was only okay, I didn’t think the extras on MASKED & ANONYMOUS were that great, and as much as I like several of Rodriguez’s movies I associate his studio with fake looking green screen backgrounds and cheesy digital effects. But it turns out there was nothing to worry about. The script is simple and tasteful, the direction is tense and consistent in tone, and it’s all shot on location in jungles with only appropriate use of the computers. Real jungle, real rubber Predator suits, real fake blood.

The key though in my opinion has nothing to do with effects and monsters, it’s that this team gets PREDATOR in a way alot of other individuals don’t. PREDATOR is a monster movie, but people forget that the monster is invisible for most of the movie. He has “good kills” (some of them off screen) but you spend most of the time with the humans, and you want to. PREDATOR has one of the all time great elite teams of badasses between Schwarzenegger, Carl Weathers, Jesse “The Body ” Ventura, Sonny Landham and Bill Duke (special guest star Shane Black). PREDATORS takes a good shot at capturing that spirit, putting together Danny Trejo, UFC’s Oleg Taktarov, Larry “Morpheus” Fishburne, respectable relative newcomers Louis Ozawa Cahngchien and Mahershalalhashbaz Ali, wirey Walton Goggins from ‘Justified’, female Alice Braga (CITY OF GOD, REDBELT, I AM LEGEND), and more female Topher Grace. (I guess Topher is the Shane Black of the movie. Would’ve been cool if they went with another screenwriter. My vote would be for Charlie Kaufman, or Nicolas Cage as Charlie Kaufman.)

All these people arrive fully dressed and armed (ammo doesn’t seem to be a problem). Most of them were snatched up while in combat, except the Yakuza (who decides to take off his dress shoes and McClane it, but still looks good in his suit).

The master stroke was casting Brody. You can’t compete with Schwarzenegger for cartoony musclemen, so instead they went with the youngest ever winner of the Academy Award for best actor, a man who’s worked with Steven Soderbergh, Spike Lee, Terence Malick, Roman Polanski, Peter Jackson, even Wes Anderson and Dario Argento, but who was 15 when PREDATOR came out and probly realizes it’s awesome. He’s bigger and grimmer than you’ve seen him before, but he’s the leader because he’s smart and observant, he figures out what’s going on, what the Predators are trying to do, how to handle them, he even tests them much like they’re testing him. I guess in A-Team terms he’s Hannibal.

Brody takes the role seriously, trying to earn his place in a PREDATOR movie instead of treating it like he’s doing it a favor. He’s a great lead heading a great team. I knew most of them had to die but kept hoping they would last longer. You couldn’t say that about any character in the last AvP movie, even if you could remember who any of the characters were or vaguely what they looked like or did in the movie.

I can’t say these are three-dimensional, strongly developed characters, but Antal and friends paint good sketches without much dialogue, or even telling us some of their names. Group-of-strangers-fighting-together movies can easily get bogged down in backstories, but luckily here they’re mostly limited to either one corny “where I come from, we do it like such-and-such” line or just Brody pointing at them and guessing their combat affiliation. Brody does great with dialogue, but most of the others practice the forgotten art of stoicism.

I loved seeing Taktarov in there. He’s one of the MM-artists and has had small parts in a bunch of movies, but I first noticed him as a standout in an obscure DTV called ROCKAWAY. If you read that review you’ll see where I complain about Russians always having one of a handful of names in American movies. His character in that was “Ivan,” which I thought was ridiculous when his real name is so distinctive. In this one I don’t think they ever say his name, but the credits say it’s Nicolai. That should’ve been on my list with Yuri and Boris.

My favorite character might be the Yakuza, though. He barely talks, and the others rarely pay attention to him. When he first joins the group they don’t even notice him standing there, and I don’t think they notice his bare feet or comment on him wearing a suit in the jungle. In fact I’m pretty sure nobody finds out that he (GENERAL SPOILER ABOUT CONTENT OF MY FAVORITE SCENE) has a samurai duel with a Predator. That’s such a great idea, just the right mix of absurdity, poetry, and setup from PREDATOR 2. He kind of has his own little wordless storyline.

Antal’s building of tension and construction of thrills seems much stronger than in ARMORED. Maybe part of it is the excellent score by John Debney. He completely captures the feel of Alan Silvestri’s original score, that presumed dead style of blood-pumping themes (also a nice reworking of the original theme in the end credits).

I enjoyed this movie a whole hell of alot, but I don’t want to overhype it. It’s more of a solid entry than a new classic. No huge surprirses, and after this many years I think we could hope for a little more sophisticated and envelope-pushing monster battles at the end, more upping of the ante and more curveballs thrown our way. There’s lots of good monster stuff, but believe it or not I think that’s the weakest part of the movie. That’s almost refreshing, actually, but of course if I liked the monsters as much as the humans it could be even better.

You could be picky about the scene with digital monsters, which have that unfortunate CGI weightlessness and constant pouncing, but they look cool anyway if you ask me. It also might be fun to have more of a (SORT OF IMPLIED SPOILER I GUESS) throw-you-for-a-loop ending to imply strange new directions for any future episodes. But I’m glad they don’t point us toward what nerds call “The Predator Homeworld” but in my opinion is actually called Predatoria or Predatron. I know people want to see it, but I don’t think they’re thinking it through at all or they’d realize how hard it would be to not make that totally asinine. I don’t want to see a whole planet of these violent fuckers shooting laser spears at each other but somehow managing to have an effective spaceship manufacturing industry. And it would be even worse to see the wimpy civilian Predators who piss off these hunter Predators by forcing them into space with all their endangered species protections, laser control and self-destruct registration laws. Do you want to see a Predator wearing the Predatropolis equivalent of a suit and tie? I’m thinking not all Predators look like warriors. Even the ones that are probly aren’t allowed to wear their masks in public because of bank robberies and stuff.

I mean, ask yourself honestly: do you really want to find out what a girl Predator looks like? Before you answer, let me remind you what a girl Yoda looks like: 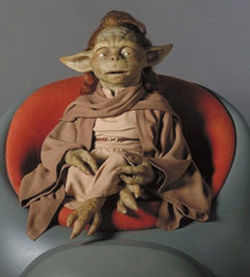 You know what, just in case that doesn’t do it, maybe I better remind you what a girl gremlin looks like: 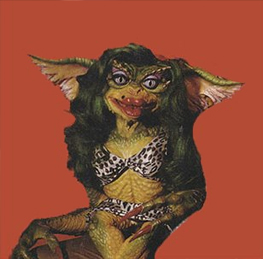 Just keep that in mind, you Predator Homeworld people. Keep the phrases “Predator lipstick” and “Predator eyelashes” in mind. As I believe Wes Craven’s Wishmaster said at the end of his end credits, “Be careful.. what you WEESH for!! ha ha ha ha!”

Somebody asked me if PREDATORS was better than PREDATOR 2. I actually like PREDATOR 2, so my answer was that PREDATORS is more of a consistent and solid construction, but doesn’t have as much crazy imagination. I hope it leads to some more good Predator movies, building off of this tone and approach and maybe going in some weirder directions.

(my pitch for a PREDATOR sequel they probly wouldn’t do now that they’ve moved it to space: a Predator comes down and gets in a battle with soldiers like in part 1, but they’re actually able to call in the full force of the military, and this one Predator has to take on armies, tanks, bombers and drones until his backup arrives. Or of course there’s the old standby where Predator hunts Godzilla and flies home with a giant monster skull strapped to the top of his ship.)

all my Predator related reviews here

Adrien Brody Alice Braga Danny Trejo Laurence Fishburne Nimrod Antal Oleg Taktarov Robert Rodriguez Topher Grace Walton Goggins
This entry was posted on Saturday, July 10th, 2010 at 8:48 pm and is filed under Action, Reviews, Science Fiction and Space Shit. You can follow any responses to this entry through the RSS 2.0 feed. You can skip to the end and leave a response. Pinging is currently not allowed.