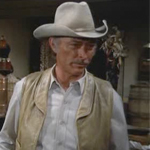 The final MAGNIFICENT SEVEN sequel came 12 years after the original from Canadian-born TV director George McCowan, after doing FROGS the same year. Screenwriter Arthur Rowe had also done mostly TV, including a few westerns like The Range Rider and The Adventures of Rin Tin Tin. This time Lee Van Cleef takes over as Chris Adams, but if they didn’t say his name it would be easy to not realize he was the same character.

The opening is reminiscent of the much better sequel HIGH NOON PART II, because now Chris is a marshal in the Arizona territory and he’s using his recent marriage as an excuse not to use his magnificence to help bounty hunter Jim Mackay (Ralph Waite, The Waltons, CLIFFHANGER) defend a Mexican border town from bandits like he used to do in the old days. He’s not like that anymore, and all their magnificent buddies are dead or in jail. Some of them he put there.

Supposedly he even owes Jim one, but not from some incident we saw in one of the other movies, since this is not a character we’ve seen before. Continuity opportunities are also missed when Chris is asked about his legendary exploits and they have none of them are things he did in the other movies. This could’ve been an unrelated western they changed into a sequel right before filming.

Meanwhile Chris’s wife Arrila (Mariette Hartley, MARNIE, THE RETURN OF COUNT YORGA, ENCINO MAN) is all over his balls about arresting Shelly Donavan (Darrell Larson, FUTUREWORLD, 13) for robbery. His parents assure he is a sweet kid who never got in trouble before and this was just a youthful indiscretion type deal. Chris doesn’t buy it, but has a passing moment of mercy the next day as he’s loading his prisoners into the wagon, decides to listen to his wife and tells the kid to beat it and stay out of trouble.

Shelly in my opinion is ungrateful, so instead of taking this opportunity to straighten out his life he immediately goes to his buddies Hank and Bob (Gary Busey and Robert Jaffe), robs a bank, shoots Chris and takes Arrila hostage. 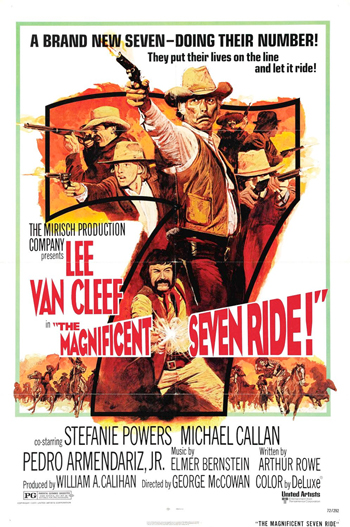 Injured Chris is up and at ’em two days later, and obviously is gonna go after these boys. He brings with him Noah Forbes (Michael Callan, CAT BALLOU, LEPRECHAUN 3), a guy who just started writing a book about his adventures, so the Steve McQueen at his side is really more of a Saul Rubinek. I’m sorry to say they soon notice circling buzzards.

“Something’s down there,” Chris says. And, knowing what it probly is, he waits as Noah goes to confirm.

They catch up with Hank and Bob, but Shelly has ditched them for Mexico. The brothers are surprised to find that the marshal is not interested in providing them with a fair trial.

On the trail Chris and Noah pass Jim and that town he’s defending. He sees his pathetic army of farmers and a priest and tries to convince them to run away, just like the wimpier people wanted to do at the beginning of SEVEN SAMURAI and MAGNIFICENT SEVEN before other people came up with a better plan. He refuses to help for a second time.

To make a long story short, and to include spoilers, Chris can’t get the sweet, sweet revenge he’s so hungry for, because by the time he gets to him he’s already dead. And without his help Jim and the farmers and the priest are massacred, as he knew they would be. And to make matters worse, we learn (but thankfully do not see) that De Toro (stuntman Ron Stein) and his 40 bandits found the 17 women left behind in the church and gang raped them. And they’re thinking of killing themselves before those monsters come back and do it again (maybe kind of a reference to the woman in SEVEN SAMURAI who does commit suicide, though as some of you pointed out to me that was for a different, even more fucked up cultural reason).

I don’t mean to bad mouth Chris when he’s down, but he’s kind of a piece of shit in this one. I can’t believe he refused to help his friend not once but twice, and got everybody killed and raped. Maybe if there was money in it he would’ve done it? Anyway now, fucking FINALLY, he decides to be magnificent again. And his way of getting a team is pretty cool: he goes to the prison and gets the same prisoners we saw him transferring there at the beginning, promising them a pardon if they help him with this mission (and survive). Sort of a DIRTY DOZEN situation. Or maybe a Snake Plissken, since it’s Lee Van Cleef. He brings these magnificent basterds back to the women of the village and instead of saying “oh yeah, I got a bunch of convicts set loose and brought them here” he introduces them as “humanitarians.”

He plays a great trick by taking them to trash De Toro’s home and kidnap his lady (Rita Rogers, THE DEVIL’S BRIGADE) and then explaining to them that if they ditch the mission for Mexico they’ll be hunted down by De Toro. So now, finally we have seven people defending a town, like he should’ve agreed to do at the beginning, saving numerous lives and sexual assaults.

When the actual fighting occurs the movie gets much more exciting. They plan out this battle like it’s BRAVEHEART, and one of the seven played by Ed Lauter (DEATH WISH 3, THE ARTIST) has a background in construction, so they’re able to dig trenches and build different traps. It really is a full on army coming at them on horseback, and they have a pop up barb wire fence that stops them so they can shoot at them, then corral them onto some land mines.

But the characters aren’t particularly memorable, and besides Lauter the most became-a-big-deal-later cast member is James Sikking, who played Doogie Howser’s dad.

This is definitely the darkest of the series, and some of the matter-of-fact harshness is pretty effective. But it’s also a bummer in ways that don’t feel very MAGNIFICENT SEVEN to me. I do not share its values. It has a brutal sense of justice that I’d think were inspired by DEATH WISH if it didn’t come two years before it.

The story shows women as much nicer than men, and wrong for it. Arrila advocates for Shelly, because he’s only 18 and didn’t kill anyone, and then he rapes and kills her. Later another woman who is sort of like Chris’s replacement wife feels sorry for De Toro’s lady and lets her go, but she’s immediately killed in crossfire. Shoulda listened to your man, is the implication.

And the movie doesn’t seem to object to Chris’s lack of enlightenment about gender roles. He makes the men and women stand on opposite sides of the room, then has the men choose their female partners. There are more women than men, so “Keep choosing until they’re gone.” He tells the women to “take care of” their men by feeding them and loading their guns. At the end of the movie all of these women are in love with the men who chose them. One of the guys even plans to marry two of them, since he’s from Salt Lake City. And they’re all delighted about this.

So in this world mercy is always a mistake, and a woman’s purpose is to feed and reload for men in exchange for rape protection. And husbands who died trying to protect them can be quickly replaced by criminals who are better at fighting.

This is interesting because I think even the 18-years-older Japanese movie that started all this had a better attitude toward women. The two major female characters are treated horribly, but I think Kurosawa is looking at them with more humanistic eyes, having great sympathy for them and what they’re stuck in the middle of. The father disguising his daughter as a man, and also trying to control her sex life, is portrayed as well-meaning but ridiculous.

I actually messed up and watched this one before the other sequels, not realizing at first that there were other sequels. In a way that was a good idea, because it’s less fun than the other ones and might’ve seemed worse after them. I can respect that this one mixes up the formula more than the others, but I think its mistake is in changing the feeling behind it. This started as a story about sacrifice, generosity and teamwork, about trained killers learning to help the poor and defenseless on principle instead of as a job. That’s kind of here but it’s harder to see behind the macho kill-them-all-or-they’ll-rape-our-women worldview.

Ed Lauter Elmer Bernstein Gary Busey George McCowan James Sikking Lee Van Cleef Michael Callan
This entry was posted on Wednesday, September 28th, 2016 at 1:48 pm and is filed under Reviews, Western. You can follow any responses to this entry through the RSS 2.0 feed. You can skip to the end and leave a response. Pinging is currently not allowed.

3 Responses to “The Magnificent Seven Ride!”