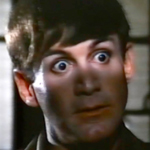 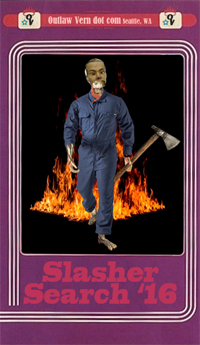 In my experience as a slasher searcher I’ve found that unknown movies from the ’70s are the biggest risk because 1) it’s mathematically less likely that there’s a great one you’ve never heard of and  2) they were made before the slasher formula really set in. I didn’t realize when renting THE PSYCHOPATH that it was from 1973, too early to be influenced by THE TEXAS CHAIN SAW MASSACRE, let alone HALLOWEEN. It feels more like a BAD RONALD or WILLARD type of ’70s-TV-looking weirdo movie, but it does have some of the slasher elements: a freaky killer, a gimmicky motive, one-dimensional victims.

It didn’t take long for the movie to throw me a what-the-hell!?. The title comes up over ominous sounds and a scary closeup of an eye. The sort of thing you’d expect. But then the happy music comes on and the credits use a font similar to My Three Sons. Throughout the movie the soundtrack, credited to “Country Al Ross,” alternates between very upbeat country jams and straight up funk (which I’m guessing is library music).

The titleistical psychopath is children’s TV star Mr. Rabbey (Tom Basham, COLOSSUS: THE FORBIN PROJECT), who figures out some of the children from his studio audience and hospital visits are being abused, and decides to murder their parents. He bashes a woman’s face in with a baseball bat, for example.

I’m not sure how sympathetic Mr. Rabbey is supposed to be, but I find him completely unpleasant and gross to watch even before you know he’s a murderer. The “Mr. Rabbey” Show is just a Punch & Judy type puppet show performed in front of a peanut gallery of kids sitting on the floor. I’m not clear if he’s ever seen on camera, but we see him having creative differences with director Richard (Jeff Rice), who has one of the most ridiculously looking fake beards I’ve seen in a non-comedy. I don’t get it, because why does this character need to have a beard? Is it that important for him to look like Francis Ford Coppola?

His… manager, or producer, or friend or something, Carolyn (Gretchen Kanne) defends him as if he’s a brilliant, eccentric artist who needs to be allowed space to create. “You’ve got to try to understand how he works!” she says. 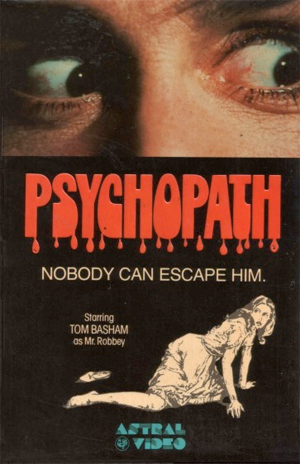 Then we see how he works: he goes to the park and plays with little kids as if he’s one of them, sitting in the sandbox like he doesn’t know he doesn’t belong there. One mother yells at him about it and threatens to get him in trouble. She’s portrayed as a jerk but of course this is what any responsible parent would have to do.

With his make-up, effeminate voice and manchild behavior some might compare him to Pee-wee Herman, but of course he doesn’t have the humor or playfulness of Pee-wee, he’s just a man talking like a baby. And he acts that way at home as well. He calls Carolyn “Mommy,” so I thought that was what she was, but she later denies it. Whatever she is she’s a total enabler, letting this grown man talk to her about his tattered security blanket (also named Mr. Rabbey) as if it’s a person. He later whips at a victim with Mr. Rabbey, which seems intimidating just as a bizarre thing to do, but then it implausibly knocks her unconscious.

Obviously none of this is healthy or acceptable behavior, but Carolyn protecting him is especially puzzling because he just does a generic puppet show not really worthy of being televised. Maybe if it was, like, Yo Gabba Gabba or something.

That’s the more interesting part of the movie. Alot of it is about cops trying to figure out who’s committing these murders. Not very exciting. But one of the cops is John Ashton from BEVERLY HILLS COP. It would be cool if this movie was Taggart’s backstory.

Also, the nurse is played by Margaret Avery, who was the love interest in THE RETURN OF SUPERFLY. 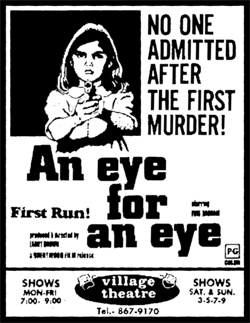 The very end got the biggest laugh from me: as an abusive mother is struggling with Tom, her daughter comes in with a gun and shoots him. Phew. Rescued by a child with a deadly weapon. But then the mother realizes the girl is still standing there with the gun. Pointing it at her. And it ends on a freeze frame of the kid firing the gun again. The marketing people knew that was the best part, because they used a drawing of it for newspaper ads. Apparently for some screenings there was a gimmick where they had the audience vote whether or not the kid was guilty. (Results are non-binding.)

Shazam! star Jackson Bostwick, who appeared in THE PINK ANGELS, was executive producer of this one.

It’s an interesting movie for me, because as horrendously shitty as it is, it did bring back some memories of that era. I would never consider myself to have been abused, but I did come from a time when it was normal to be hit as punishment, including with objects. I didn’t realize until I was grown that most people didn’t associate spatulas with spanking, that was just my mom that used it for that. I wouldn’t do it if I had kids, and I bet my parents wouldn’t have either later in life, but that was what society dictated parents were supposed to do back then, and most did.

The parents in this movie do take it farther, and the actors are very convincing as they yell hatefully at the kids. I don’t so much believe the POV shot of the mother nodding proudly as her husband beats her son’s ass hard with a ping pong paddle, but the torrents of anger spewed at the kids feel genuine. That is something I did not fall victim to, but I remember seeing it happen to friends and relatives. Today, thankfully, it’s more frowned upon. Most of them at least know they can’t do it in public.

Although THE PSYCHOPATH is a movie worth forgetting or not knowing about in the first place, it does have a tiny, weird significance in slasher movie history. In 1986, Joe Spinell tried to make a sequel-in-name-only to his classic MANIAC. In a short promo film we can see that he would’ve played a children’s TV host clown who murders the abusive parents of his fans. It’s a basic enough concept that two people could come up with it separately, but his character is called “Mr. Robbie”! I suspect Spinell had seen THE PSYCHOPATH at a drive-in or something and, maybe unconsciously, was copying the idea.

His performance is better though. As far as scummy psychos go, Mr. Robbey is much more tolerable to watch than Mr. Rabbey. My name is Vern and I approve this message.

Country Al Ross John Ashton Margaret Avery slashers Tom Basham
This entry was posted on Thursday, October 13th, 2016 at 10:55 am and is filed under Horror, Reviews. You can follow any responses to this entry through the RSS 2.0 feed. You can skip to the end and leave a response. Pinging is currently not allowed.

One Response to “The Psychopath”