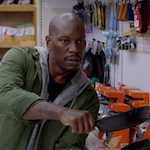 Like many people of an older persuasion, my first impression of Tyrese Gibson was twenty years ago when he starred in John Singleton’s BABY BOY. At the time it had a mixed reception, but I thought it was a good companion piece/followup to BOYZ N THE HOOD, and this R&B singer or whatever he was, he was good in it. (For a long time I thought he had started as a model, but now I’m thinking I had him mixed up with Tyson Beckford?) It has some laughs in it, but it’s a dramatic role. He goes through quite a bit.

To Gibson’s great fortune, it was Singleton who was directing the first sequel to THE FAST AND THE FURIOUS when Vin Diesel decided he didn’t want to do it and a new co-lead was needed. So he swooped in to play Roman Pearce, childhood friend of Brian O’Connor (Paul Walker) who blames him for his prison bid for car theft but reluctantly accepts an undercover job with him to gain his freedom (an obvious rewrite of where Dominic Toretto would’ve ended up if he’d been in the movie). The two characters do some bickering, but at that time Roman was a serious action guy, a type Gibson would also play in WAIST DEEP, some TRANSFORMERSes, DEATH RACE and LEGION. He collaborated with Singleton again on FOUR BROTHERS and with pre-TOKYO DRIFT Justin Lin on ANNAPOLIS but was not one of the FAST crew invited back for part 4.

Eight years after 2 FAST 2 FURIOUS, when Roman finally returned in FAST FIVE, Diesel was back in the central role, so Tyrese got to riff and be silly. Other than saying grace in FURIOUS 6 and monologuing about sacrifice (while flying a space hooptie) in F9, he has mainly remained comic relief for four subsequent FASTs.

This is my point: I like funny Tyrese, but he’s gotten a little formulaic and repetitive. I miss series Tyrese, especially in the FAST movies. It’s the heart and the melodrama that fuels those movies. The silliness is just a NOS boost. 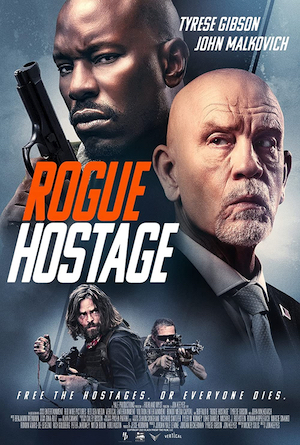 Therefore I was kind of excited to see Gibson headlining a DTV DIE HARD type movie called ROGUE HOSTAGE. Sure enough he does take this one very seriously, and he can still do it. The trouble is this is not the good kind of DTV that means better action or more craziness. This is the current style where the cinematography and sets look way too bright and clean and the casts struggle to bring any personality to the generic scripts. I’m not sure if it’s a pandemic production or not – they have a large group of people taken hostage and shown in the same shot together, so it doesn’t really seem like it. But it definitely has that feeling of just clocking in and doing the minimum of what’s expected rather than really trying to make something special. It doesn’t excel at absolutely anything, but other than a not-entirely-figured-out script (credited to Mickey Solis, voice of “Murfree Brood,” Red Dead Redemption II) it’s generally just competent enough to avoid being funny or weird.

Gibson plays Kyle Snowden, PTSD suffering ex-Marine turned Child Protective Services agent. He’s woken up from a the-bad-thing-that-happened-in-Afghanistan nightmare by his angelic daughter Angel (Zani Jones Mbayise, HIDDEN FIGURES) asking him to protect the children on a TV ad about hunger in Africa. Later he and his co-worker Clove (Brandi Bravo, THE ADVENTURES OF CRICKETT AND THE LITTLE GIRL POWER) go pick up an abandoned Mexican immigrant boy named Manny (Carlos S. Sanchez, HERMANOS) and decide to stop at a closed grocery store to get him food.

Yes, that’s strange. The idea is that Clove’s cousin Sunni (Luna Lauren Velez, New York Undercover, Oz, Dexter) is the manager there and also Kyle’s stepdad Sam Nelson (John Malkovich, IN THE LINE OF FIRE), who he hates, is inside peparing for a big annual event of unspecified nature. See, the store is called “Nelson’s” because Sam is the owner and namesake and though it’s just a lightly stocked medium sized department store it has many photos of him in a Steve Jobs turtleneck looking pensive beneath wise sayings. Also he’s a congressman.

Here’s one thing I didn’t expect: Congressmnan stepdad CEO Nelson has a bodyguard, Sparks, played by none other than Michael Jai White. I honestly didn’t know he’d be in it – he’s not pictured or named on the cover. But you know what that means: he doesn’t get to kick anyone. At least he has scenes with Malkovich and Gibson. I wonder if that means they were all in the same Covid bubble?

The DIE HARD scenario is that a bitter long-haired guy named Eagan (Christopher Backus, Jett), who once dated Sunni but she doesn’t recognize him, leads a crew of gunmen in taking the store hostage and wiring it with explosives for some combined white grievance/personal grudge. They force Nelson to record a confession that he framed his business partner, Eagan’s dad, for embezzling – it seems like he thinks that’s not true, but the truth is unclear.

Doesn’t really matter. What does is that the action is pretty minimal. It’s mostly cocky gunmen bossing scared people around, some suspense about Sunni hiding in the security room with Mikki (Holly Taylor, The Americans), an employee she just caught shoplifting (?) who is also one of Kyle’s CPS kids. It’s at least a nice modern touch that that Sunni has a wife named Rainey (Fedna Jacquet) on staff who she worries about. And I like when Eagan is ranting to Rainey about how “hard working white men get used up and die” and she tells him “I’m in vet school, I’m in debt and I work at Nelson’s.” Cry me a river, asshole.

In one of the very few action moments I remember, Kyle hits a guy over the head with a frying pan and stabs him with a skewer. I can respect that for using products on sale in the store as weapons. The only other action highlight involves this weird character of the store employee who’s a traitor, seemingly because he hates his job? When Nelson sees him with the gunmen he says, “What? Are you kidding? You’re one of my… employees!”

“I was never one of your slaves,” the guy says.

I get it, but seems a little extreme to join up with a terror group. He gets shot in the leg so he gets in a motorized cart and tries to ram Kyle with it (which was really not gonna do any damage, I gotta say) so Kyle lights him on fire with a Molotov cocktail! Later the guy shows up crawling, burnt up, looking like a zombie.

The Ellis character is Congressman Nelson’s publicist Sophie (Susannah Hoffman, “Woman on Plane,” AMAZING SPIDER-MAN 2 video game), who is repeatedly rude to the staff, and tries to sell them out to the terrorists, but then at the end when Nelson is humiliated on TV she says “I quit!” and it seems like it’s supposed to be a stick it to the man moment? Then right after that it shifts again with a scene where he reveals that Kyle has earned his respect through his heroism today, as if that matters. Before that we could assume the movie wanted us to think of him as a piece of shit, because he was willing to flee the building while Manny was still being held hostage. But there’s also a scene where “I promised Clove I’d save that little boy. I gave her my word. That’s all I got.” As if you need a death bed vow to prompt wanting to protect a child from danger. Nelson didn’t make such a vow, so I guess he’s off the hook.

I mean I guess you could argue the movie is multi-layered and doesn’t want to tell you what to think about the characters. But it seems like they just changed their minds from scene to scene.

Gibson doesn’t seem to be one of those actors who goes for broke even on a cheap ass production like this, but he’s pretty good in a scene where he’s sitting around drunk and depressed with a cigarette hanging off his lip. That speaks to the character much better than the freaking-out-from-PTSD scenes. And though this is definitely not a movie to watch specifically for Michael Jai White, I was happy when he turned out to have survived being shot so he could sit there wounded and discuss strategy with Kyle. They might be cool partners in a better movie.

And it’s too bad because there was a time – a magical time called the nineties – when this exact premise and cast could’ve been given a budget considered small for a studio theatrical release but enormous compared to this, and they would’ve been able to blow some shit up and give it a little realism and I’m sure it wouldn’t have been great but it might’ve been solid. It just seems like there’s not a market for straight-forward DIE-HARD-rip-off type stuff like that anymore, or at least the money people don’t think there is so their short-sightedness is preventing us from getting any.

We didn’t get that from ROGUE HOSTAGE, but we did get is evidence that when you take away Tyrese’s humor I miss that just as much as I missed his seriousness. So my hope is that maybe this movie can recalibrate him to have more of a balance. I think he’s best in the middle somewhere.

The director of this one is Jon Keeyes, who has previously done obscure low budget horror movies including AMERICAN NIGHTMARE and THE HARROWING. The stunt coordinator is Shauna Galligan, a stunt double from various TV shows and AVENGERS movies who also coordinated the upcoming Keeyes/Malkovich joint THE SURVIVALIST.

Brandi Bravo Carlos S. Sanchez Christopher Backus Die Hard on a ____ Fedna Jacquet Holly Taylor John Malkovich Jon Keeyes Luna Lauren Velez Michael Jai White Mickey Solis Shauna Galligan Susannah Hoffman Tyrese Zani Jones Mbayise
This entry was posted on Tuesday, September 7th, 2021 at 6:50 am and is filed under Action, Reviews. You can follow any responses to this entry through the RSS 2.0 feed. You can skip to the end and leave a response. Pinging is currently not allowed.